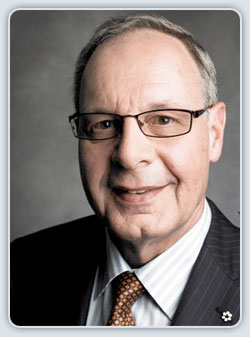 Frank O’Dea, author of When All You Have Is Hope

His topic was “Hope, Vision, Action”. Here is a Youtube video of a similar presentation on the same topic:

Frank O’Dea is the author of When All You Have Is Hope. He’s an entrepreneur, philanthropist and inspirational speaker. He went from being homeless on the streets of Toronto to being a co-founder of Second Cup and an Officer of the Order of Canada. Faith was a big part of his story. He will tell that story and lessons from it.

Frank O’Dea’s life went off the rails in his early teens. Within a few years, he was living in 50-cent-a-night flop houses in Toronto’s bowery district where simply surviving was a challenge.

Against all odds, at the age of 23, with the courage to hope for a better life, and the spirit to forge ahead, Frank began the long road back. Fighting the formidable obstacles that hold back the homeless, the impoverished and the destitute, he overcame and rejoined society.

Then, as if that were not enough, he turned that same determination to the many obstacles in life that we all face. Within a few short years, he co-founded The Second Cup, which soon became the largest chain of gourmet coffees and teas in the country. Building on that success, he went on to co-found Proshred Security, a company that pioneered the entire industry of on-site document destruction. This company soon became an international organization with franchised operations in Canada, Europe and the United States.

Early on, Frank took steps to give back to the community. He began by serving on the boards of directors of charities and not-for-profit organizations. But the entrepreneur’s desire to innovate and build was not to be denied. In 1985 he co-founded Street Kids International, an organization developed to help homeless children in third world countries, through education and self-reliance.

A few years later, he became the founding Chair of War Child (Canada), an organization that provides assistance against suffering and abuse of children in war affected countries. In the same year, Frank co-founded the Canadian Landmine Foundation, an organization that raises funds for the dismantling of minefields around the world. He went on to initiate that organization’s most successful fund raising, “Night of a Thousand Dinners”, with participation of people in 29 countries, raising millions of dollars.

Frank is currently the Chair of the Royal Roads University Foundation and serves on the board of directors of a number of private corporations and not-for-profits.

Odea’s inspiring story is retold in his book, “When All You Have is Hope”.