In Memory & In Hope 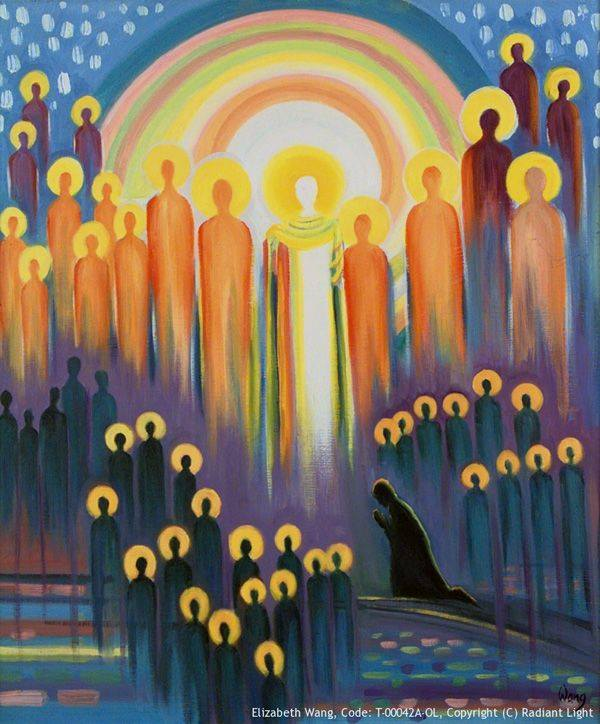 The Sacrament of Communion – The Bread and Wine of Remembrance

I heard a voice out of heaven saying,
“Behold, the dwelling of God is with all people,
And God shall dwell with them,
And they shall be God’s people.
God shall be with them,
And the voice of weeping shall no more be heard;
And God shall wipe away all tears from their eyes,
And there shall be no more death,
Neither sorrow, nor crying,
Neither shall there be any more pain,
For the former things are passed away.”
(Revelation 21:3,4)

“I am the resurrection and the life,” saith the Lord:
“He that believeth in me, though he were dead,
Yet shall he live:
And whosoever liveth and believeth in me,
Shall never die.”
(From Missa pro defunctis and
The Burial Service, 1662 Book of Common Prayer)

Opening Hymn For All the Saints

For all the saints who from their labours rest,
All who by faith before the world confessed,
Your name, O Jesus, be forever blest.
Alleluia! Alleluia!

You were their rock, their fortress, and their might;
You, Lord, their captain in the well-fought fight;
You in the darkness drear their one true light.
Alleluia! Alleluia!

O may your soldiers, faithful, true, and bold,
Fight as the saints who nobly fought of old,
And win with them the victor’s crown of gold.
Alleluia! Alleluia!

O blest communion, fellowship divine!
We feebly struggle, they in glory shine;
Yet all are one in thee, for it is thine.
Alleluia! Alleluia!

And when the strife is fierce, the warfare long,
Steals on the ear the distant triumph-song,
And hearts are brave again, and arms are strong.
Alleluia! Alleluia!

The golden evening brightens in the west;
Soon, soon to faithful warriors comes their rest;
Sweet is the calm of Paradise the blest.
Alleluia! Alleluia!

But then, there breaks a yet more glorious day –
The saints triumphant rise in bright array:
The King of glory passes on his way.
Alleluia! Alleluia!

From earth’s wide bounds, from ocean’s farthest coast,
Through gates of pearl streams in the countless host,
Singing to Father, Son, and Holy Ghost.
Alleluia! Alleluia!
Amen.
(William Walsham How, 1823-1897)

Give us the wings of faith to rise
Within the veil, and see
The saints above, how great their joys,
How bright their glories be.

We ask them, whence their victory came:
They, with united breath
Ascribe their conquest to the Lamb,
Their triumph to his death.

They marked the footsteps that he trod –
His zeal inspired their breast –
And, following their incarnate God,
Possess the promised rest.

O Lord, support us all the day long,
‘til the shadows lengthen, and evening comes,
and the busy world is hushed,
and the fever of life is over,
and our work is done.
Then in thy great mercy grant us safe lodging,
and holy rest, and peace at the last;
through Jesus Christ our Lord. Amen.
(from the Book of Common Prayer)

Let peace then still the strife, the loneliness and grief,
Come heal the piercing silence of passing.
And sweet familiar strains, the voices lost in death,
Arise in songs of hope everlasting.
Then let the voices roll, as waves upon the sea;
Come forth and break upon us, refreshing.

And barren coves be filled – o’erflow with reverie!
Let mem’ry salve as Gilead’s caressing.
And though the balm be spread, let tender rifts remain
That breaking hearts not yield to forgetting.
For hearts rent wide at death, unfolded to our dead,
Hear singing from beyond sunlight’s setting.

Then sing, belovèd ones, reach o’er the summer sea.
Pour forth thy boundless love for us living!
Sweep into ev’ry soul, make music of our tears,
Turn all our songs to joy and thanksgiving!
And when we silent pass, from far across the sea
Let praises ring for life’s wond’rous blessing.

O Lord of life, where’er they be,
Safe in thine own eternity,
Our dead are living unto thee.
God is with us, now and ever.
Thanks be to God.

All souls are thine, and here or there
They rest within thy sheltering care;
One providence alike they share.
God is with us, now and ever.
Thanks be to God.

Thy word is true, thy ways are just;
Above the requiem, ‘Dust to dust’,
Shall rise our psalm of grateful trust:
God is with us, now and ever.
Thanks be to God.

O happy they in God who rest,
No more by doubt and fear oppressed;
Living or dying, they are blest.
God is with us, now and ever.
Thanks be to God.
(Frederick Lucian Hosmer, 1840-1929,
adapted, E. D.)

Go forth upon Thy journey from this world, O Christian soul,
in the name of God the Father, the Son, and Holy Spirit,
in company with the blessèd angels and archangels,
and all the heavenly host.
May Thy portion this day be in peace,
And Thy dwelling place in Jerusalem.*

*from A Russian Benediction
** from Missa pro defunctis

As we are not able to gather and pay tribute with words, remembrance, and song, we are sharing a special place for the family and friends of the departed to tell their stories.

Please visit our In Memoriam page here to read personal stories and tributes.

The text for this morning’s anthem is reprinted under onelicense.net #A-717945. Let Peace Then Still the Strife, words by David Warner, © 2008 Oxford University Press. All rights reserved.

William Walsham How (1823-1897) studied at Wadham College, Oxford, and Durham University, and was ordained into the Church of England in 1847. He served various congregations and became the Bishop of Wakefield in 1888. Called both the “poor man’s bishop” and “the children’s bishop”, he was known for his work among the destitute in the London slums, and among the factory workers in west Yorkshire. For All the Saints is considered to be How’s finest hymn text. It was sung to the melody Sarum, by the Victorian composer Joseph Barnby, until the publication of the English Hymnal in 1906. This hymnal used a new setting by Ralph Vaughan Williams which he called Sine Nomine (literally, “without name”) in reference to its use on the Feast of All Saints, November 1st (or the first Sunday in November – All Saints Sunday). Like How’s text, Vaughan Williams’ hymn tune has been described as one of the finest of the 20th century.

Howard Helvey (b. 1968) resides in Cincinnati, Ohio, where he is active as a composer, arranger and pianist, and serves as organist & choirmaster at the historic Calvary Episcopal Church. Nationally and internationally he is in frequent demand as a composer, conductor, and speaker. Known particularly for his choral music, his hundreds of compositions and arrangements have been featured on numerous recordings, national television and radio broadcasts, in such eminent venues as New York’s Carnegie Hall, the Walt Disney Concert Hall (LA), Chicago’s Orchestra Hall, the White House, the National Cathedral in Washington, D.C., and many locations throughout Europe and Asia. He holds a Bachelor of Music degree in composition from the University of Missouri-Columbia and a Master of Music degree in composition and piano performance from the University of Cincinnati’s College-Conservatory of Music.

Isaac Watts (1674-1748) was an English Christian minister, hymn writer, theologian, and logician. He was a prolific and popular hymn writer and is credited with some 750 hymns. He is recognized as the “Godfather of English Hymnody”. Many of his hymns remain in use to this day and have been translated into numerous languages.

Athelstan Riley (1858-1945) was an English hymn writer and translator. He was born in London, and attended Eton College and Pembroke College, Oxford. Active in the Anglo-Catholic wing of the Church of England, he helped edit The English Hymnal in 1906, and the 1911 revision of the Prayer Book. He was living on the island of Jersey when it was invaded in World War II, and spent the rest of his life there. Ye Watchers and Ye Holy Ones is his best known hymn.

O Lord, Support Us was written for the Senior Choir of Fairlawn Avenue United Church in 1988.

Frederick Lucian Hosmer (1840-1929) was an American Unitarian minister who served congregations in Massachusetts, Illinois, Ohio, Missouri, and California. He graduated from Harvard College in 1862, and from Harvard Divinity School in 1869. Beginning in 1875 and continuing for nearly four decades, he and his friend William Channing Gannett worked together, making a contribution to hymnody comparable to that of “the two Sams”, Samuel Longfellow and Samuel Johnson, a generation earlier. 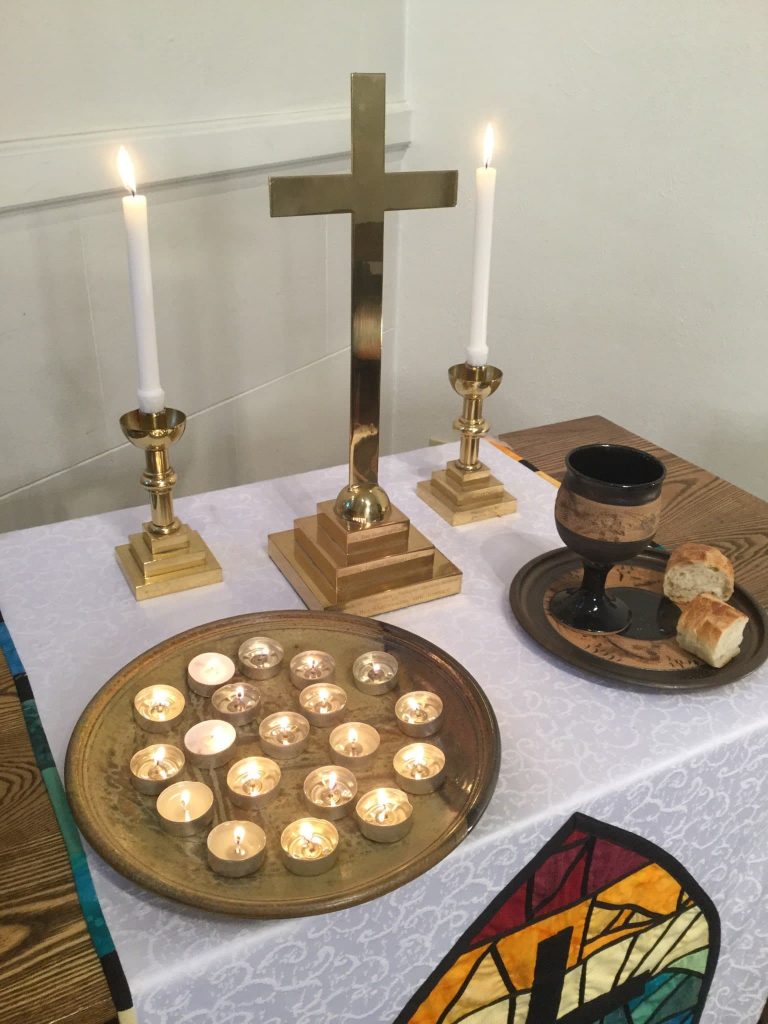