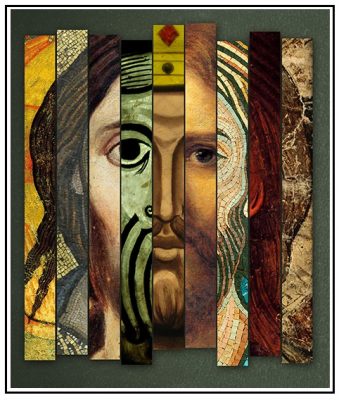 In “normal” times, this morning would have been the first Sunday with the Senior Choir back for worship services in the sanctuary after the summer. As these days are not yet “normal”, the first anthem is a virtual recording by the Senior Choir and guests.

(The following is the most commonly heard English version of the piece.
It is not a translation of the original German text.)

Jesu, joy of man’s desiring,
Holy wisdom, love most bright;
Drawn by Thee, our souls aspiring
Soar to uncreated light.
Word of God, our flesh that fashioned,
With the fire of life impassioned,
Striving still to truth unknown,
Soaring, dying round Thy throne.

Hymn In the Cross of Christ I Glory

In the cross of Christ I glory,
Towering o’er the wrecks of time:
All the light of sacred story
Gathers round its head sublime.

When the woes of life o’ertake me,
Hopes deceive, and fears annoy,
Never shall the cross forsake me;
Lo! it glows with peace and joy.

When the sun of bliss is beaming
Light and love upon my way,
From the cross the radiance streaming
Adds more lustre to the day.

Bane and blessing, pain and pleasure,
By the cross are sanctified;
Peace is there that knows no measure,
Joys that through all time abide.

In the cross of Christ I glory,
Towering o’er the wrecks of time:
All the light of sacred story
Gathers round its head sublime.
(John Bowring, 1792-1872)

May the strength of God pilot us,
May the wisdom of God instruct us,
May the hand of God protect us,
May the word of God direct us.
Be always ours this day and forevermore.
(St. Patrick, 5th century)

Closing Hymn Great is Thy Faithfulness

William Henry Draper (1855-1933) was an English hymnodist and clergyman who wrote the texts for approximately sixty hymns. He is most famous for “All Creatures of Our God and King”, his translation of “Canticle of the Sun” by St. Francis of Assisi.

O Be Joyful in the Lord was commissioned by Music Plus Corporation in Kitchener, ON, for their Music Plus Church Choir Festival, and premiered at the festival on May 30, 1999.

John Bowring (1792-1872) was a British polymath, linguist, political economist, reformer, hymnist, writer and editor, Member of Parliament, and controversial Governor of Hong Kong. Among the most famous Unitarians of his time, he was also at the head of the world’s linguists, with a speaking knowledge of eight languages, reading and writing of seven, and working understanding of a further twenty-five dialects. From the 1820s onwards Bowring wrote hymns in large numbers, many of which were published. His most well known hymn, “In the Cross of Christ I Glory” is in many Christian hymnbooks in the English-speaking world.

St. Patrick (ca. 386-461) is Ireland’s patron saint, known for spreading Christianity throughout the country during the 5th century. Much of his life is unknown to historians and can’t be verified, though some sources have listed his birth name as Maewyn Succat, with the name Patrick later taken on during his religious journeys. As a youth, he was captured by pirates in his native Britain and brought to Ireland. During his enslavement, he was called to Christianity and escaped his captors after six years. He returned to Ireland as a missionary, and in his teachings combined Irish pagan beliefs with Christian sacrament. Many legends have been associated with his life, including that he drove away all the snakes from Ireland, and that he introduced the Holy Trinity through the three-leaved shamrock.

Thomas O. Chisholm (1866-1960) was an American hymn writer. He was born in a log cabin in the small Kentucky town of Franklin, and his boyhood was spent on a farm. Although he lacked formal education, apart from attending a small country school, he became a teacher at age sixteen, and the associate editor of his hometown weekly newspaper at age twenty-one. In 1893 Chisholm converted to Christianity, and although he was ordained a Methodist minister in 1903, he served only a single, brief appointment, due to ill health. George Beverly Shea, the famous Canadian-born American gospel singer, introduced Chisholm’s most well-known hymn “Great is Thy Faithfulness”, set to music by William Runyan (1870-1957) at a Billy Graham meeting in Great Britain in 1954. It immediately became a favourite, and has survived the test of time, being found in many hymn books to this day – including “Voices United”.