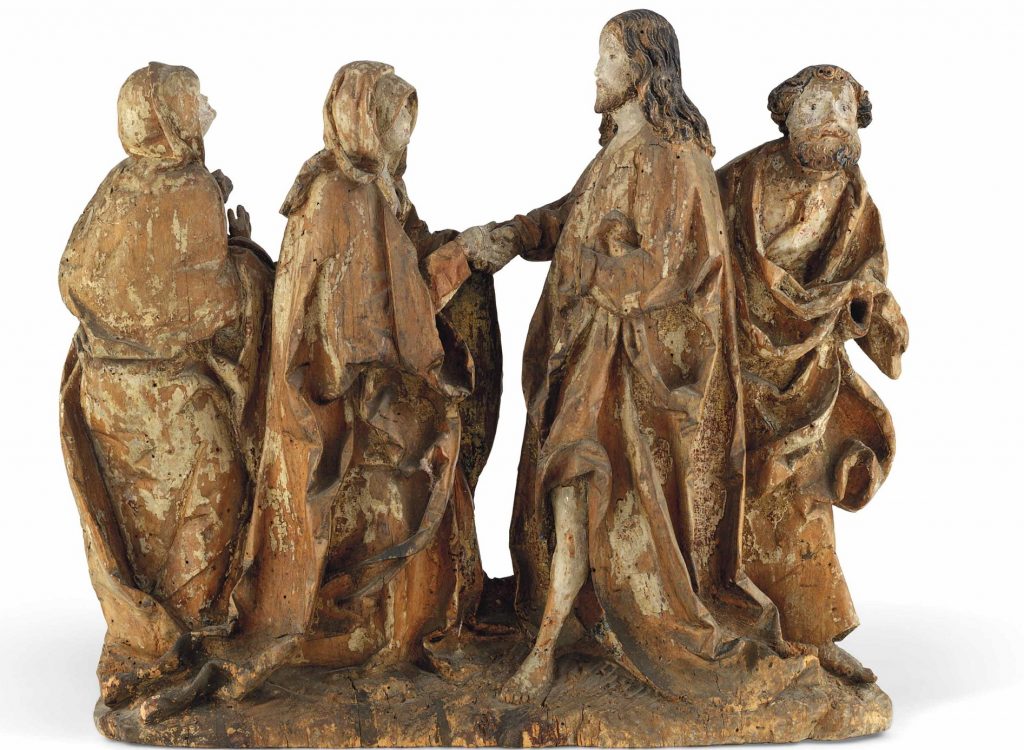 Sweet the rain’s new fall sunlit from heaven,
Like the first dewfall on the first grass.
Praise for the sweetness of the wet garden,
Sprung in completeness where his feet pass.

Mine is the sunlight! Mine is the morning
Born of the one light Eden saw play!
Praise with elation, praise every morning,
God’s recreation of the new day!
(Eleanor Farjeon, 1881-1965)

Opening Hymn New Every Morning is the Love

New every morning is the love
Our wakening and uprising prove;
Through sleep and darkness brought,
Restored to life, and power and thought.

New mercies, each returning day,
Hover around us while we pray;
New perils past, new sins forgiven,
New thoughts of God, new hopes of heaven.

If on our daily course our mind
Beset to hallow all we find,
New treasures still of countless price
God will provide for sacrifice.

The trivial round, the common task,
Would furnish all we ought to ask:
Room to deny ourselves, a road
To bring us daily nearer God.

Ancient words, long preserved,
For our walk in this world,
They resound with God’s own heart,
O let the ancient words impart.

Words of life, words of hope
Give us strength, help us cope,
In this world, where e’er we roam,
Ancient words will guide us home.

Ancient words, ever true,
Changing me and changing you,
We have come with open hearts,
O let the ancient words impart.

Holy words of our faith,
Handed down to this age,
Came to us through sacrifice,
O heed the faithful words of Christ.

Holy words, long preserved,
For our walk in this world,
They resound with God’s own heart.
O let the ancient words impart.

Ancient words, ever true,
Changing me and changing you,
We have come with open hearts,
O let the ancient words impart.
(Lynn DeShazo)

O Christ, the healer, we have come
To pray for health, to plead for friends.
How can we fail to be restored,
When reached by love that never ends?

From every ailment flesh endures
Our bodies clamour to be freed;
Yet in our hearts we would confess
That wholeness is our deepest need.

In conflicts that destroy our health
We recognize the world’s disease,
Our common life declares our ills;
Is there no cure, O Christ, for these?

Grant that we all, made one in faith,
In your community may find
The wholeness that, enriching us,
Shall reach and prosper humankind.
(Fred Pratt Green, 1903-2000)

Will you leave yourself behind if I but call your name?
Will you care for cruel and kind and never be the same?
Will you risk the hostile stare should your life attract or scare?
Will you let me answer prayer in you and you in me?

Will you let the blinded see if I but call your name?
Will you set the prisoners free and never be the same?
Will you kiss the leper clean, and do such as this unseen,
And admit to what I mean in you and you in me?

Will you love the “you” you hide if I but call your name?
Will you quell the fear inside and never be the same?
Will you use the faith you’ve found to re-shape the world around,
Through my sight and touch and sound in you and you in me?

Lord, your summons echoes true when you but call my name.
Let me turn and follow you and never be the same.
In your company I’ll go where your love and footsteps show.
Thus I’ll move and live and grow in you and you in me.

Thy hand, O God, has guided
thy flock, from age to age;
the wondrous tale is written,
full clear, on every page.
Our forebears owned thy goodness,
and we their deeds record;
and both of this bear witness;
one Church, one faith, one Lord.

Thy heralds brought glad tidings
to greatest as to least;
they bade all rise, and hasten
to share the great King’s feast;
and this was all their teaching,
in every deed and word,
to all alike proclaiming
one Church, one faith, one Lord.

Through many a day of darkness,
through many a scene of strife,
the faithful few fought bravely,
to guard the nation’s life.
Their gospel of redemption,
sin pardoned, all restored,
was all in this enfolded:
one Church, one faith, one Lord.

And we, shall we be faithless?
Shall hearts fail, hands hang down?
Shall we evade the conflict,
and cast away our crown?
Not so: in God’s deep counsels
some better thing is stored;
we will maintain, unflinching,
one Church, one faith, one Lord.

Thy mercy will not fail us,
nor leave thy work undone;
with thy right hand to help us,
the victory shall be won;
and then, by all creation,
thy name shall be adored,
and this shall be their anthem:
one Church, one faith, one Lord.
(Edward Hayes Plumptre, 1821-1891) 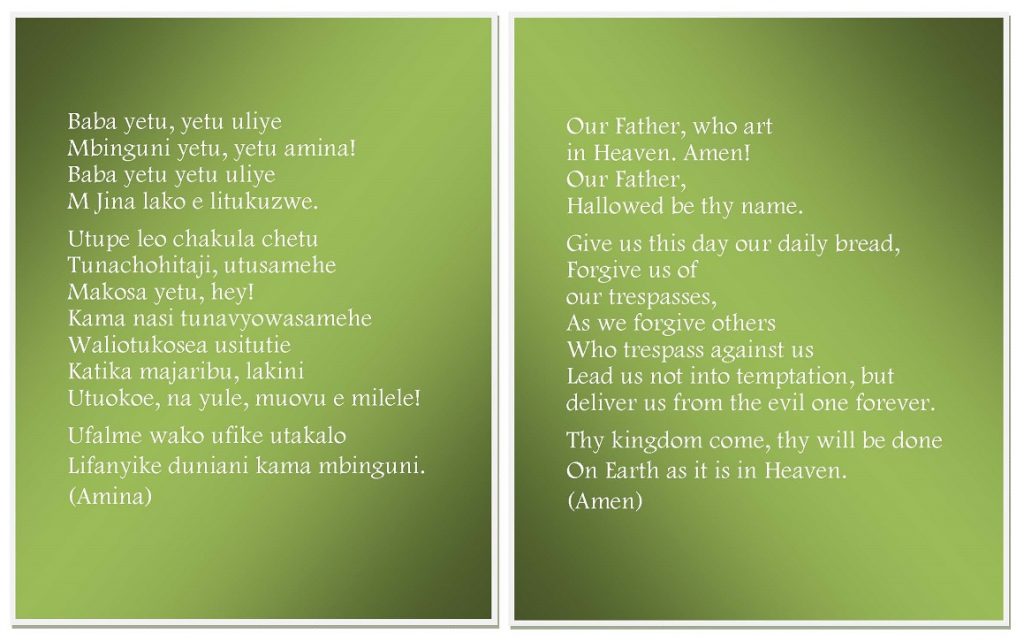 Eleanor Farjeon (1881-1965) was a British poet, biographer, and author of children’s books. Her magical but unsentimental tales, which often mock the behaviour of adults, earned her a revered place in many British nurseries! The daughter of a British novelist and granddaughter of an American actor, she grew up in the bohemian literary and dramatic circles of London. Although frequently ill as a child, thereby having to spend a great deal of time at home reading and writing, she nevertheless attended opera and theatre productions at age 4, and began writing on her father’s typewriter at age 7. When she was 16, she came to public attention as the lyricist of an opera, with music written by her brother Harry, which was produced by the Royal Academy of Music. She was the first recipient of the Hans Christian Andersen Award for lifetime achievement in children’s literature, and also received the Carnegie Medal. In 1931 Farjeon transformed her poem “A Morning Song – For the First Day of Spring” into the timeless hymn Morning Has Broken.

John Keble (1792-1866) was a British Anglican priest, theologian and poet who originated and helped lead the Oxford Movement, which sought to revive in Anglicanism the High Church ideals of the later 17th-century. Home schooled by his father, he later enrolled at Oxford, where he performed exceptionally well in Latin, Mathematics and English. After his mother’s untimely death in 1823 he returned to his childhood home in Fairford, Gloucestershire, and although he was offered a teaching position at Oxford on three occasions over the next ten years, he chose not to accept, in order to stay with his family. Keble wrote throughout his life, and published several books, of which “The Christian Year” (1825) is the most widely known. It is a compilation of poems dedicated to every religious day in the Christian calendar. In 1846, he wrote a volume of poems called “Lyra Innocentium” which related the teachings of the Church with raising children (although he didn’t have any of his own). His other gift to English literature and the Church was his collection of hymns, many of which remain popular to this day, including New Every Morning is the Love.

Lynn DeShazo (b. 1956) has been involved in worship ministry on the local church level for nearly forty years as a worship leader, a songwriter, and a teacher. She travels frequently as a guest worship leader, instructor, and minister to a wide variety of churches, retreats, and conferences within the U.S. and abroad. As a psalmist, she helps connect worshipers to the flow of God’s Spirit, bringing times of refreshing and healing to God’s people. A native of Alabama, she graduated from Auburn University, and has lived in Birmingham nearly all of her life. She did, however, live in Ann Arbor, Michigan for most of the 1980s, and does not miss the snow and ice!

Tom Trenney (b. 1977) serves as the Minister of Music at First-Plymouth Church in Lincoln, Nebraska, where he conducts the adult choirs, and on occasion, preaches. He is also Assistant Professor of Music and Choir Director at Nebraska Wesleyan University, and the founding Artistic Director of sounding light – a professional chamber choir based in Michigan. A graduate of the Cleveland Institute of Music and the Eastman School of Music, he has performed as both an organist and conductor for many regional and national music conventions, and his choral music is sung by church and collegiate choirs across America.

John L. Bell (b. 1949) is a Scottish hymn-writer and Church of Scotland minister. He is a member of the Iona Community, a broadcaster, and former student activist. He works throughout the world, lecturing in theological colleges in the UK, Canada and the United States, but is primarily concerned with the renewal of congregational worship at the grass roots level. Bell has produced many collections of original hymns and songs, several of which have been published in Swedish, Norwegian, Finnish, Danish, Dutch, Japanese and German. In 1999, he was honoured by the Presbyterian Church in Canada and the Royal School of Church Music, which bestowed a Fellowship on him, and in 2002, he was awarded an honorary doctorate by the University of Glasgow.

Edward Hayes Plumptre (1821-1891) was an English theologian, preacher and scholar. His early education took place at home. After a brief stay at King’s College, London, he entered Oxford as a scholar of University College, Oxford, and was ordained in 1847. Plumptre published several volumes of verse, and a number of his hymns can be found in various hymnals. He wrote the text of Thy Hand, O God, Has Guided in 1864.

Christopher Tin (b. 1976) is an American composer of concert music, film, and video game scores. His work is primarily orchestral and choral, often with a world music influence. He attended Palo Alto High School, and subsequently studied at Stanford University, the University of Oxford and the Royal College of Music. Tin has won two Grammy Awards for his classical crossover album “Calling All Dawns”, which includes a recording of Baba Yetu (Our Father [The Lord’s Prayer] in Swahili). 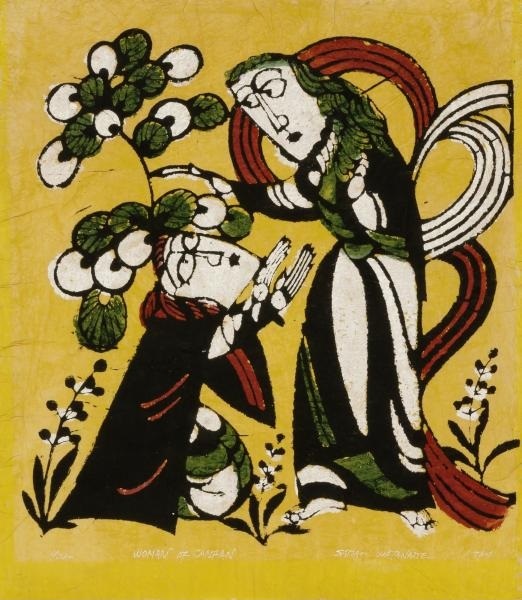 Image Sources:
A Wood Relief of Christ and the Canaanite Woman, Circle of Jörg Lederer, circa 1520-1530 https://bit.ly/33VnpeE
Woman of Canaan by Sato Watanabe https://s.si.edu/2FoUy8n
Fairlawn Flowers photograph by Elaine Perkins 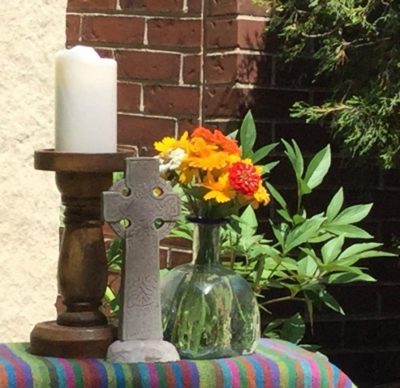