In “normal” times, this morning would have been the first Sunday with the Senior Choir back for worship services in the sanctuary after the summer. As these days are not yet “normal”, our wonderful section leads are featured singing a virtual Prelude, and the first anthem is a recording by the full Senior Choir.

Summoned by the God who made us
Rich in our diversity,
Gathered in the name of Jesus,
Richer still in unity.

Bring the hopes of every nation,
Bring the art of every race.
Weave a song of peace and justice;
Let it sound through time and space.

Draw together at one table
All the human family;
Shape a circle ever wider
And a people ever free.

Let us bring the gifts that differ
And, in splendid, varied ways,
Sing a new Church into being,
One in faith and love and praise.
(Delores Dufner, b. 1939)

May the strength of God pilot us,
May the wisdom of God instruct us,
May the hand of God protect us,
May the word of God direct us.
Be always ours this day and forevermore.
(St. Patrick, 5th century)

O God, our help in ages past,
Our hope for years to come,
Our shelter from the stormy blast,
And our eternal home.

Under the shadow of Thy throne
Thy saints have dwelt secure;
Sufficient is Thine arm alone,
And our defence is sure.

Before the hills in order stood,
Or earth received her frame,
From everlasting Thou art God,
To endless years the same.

A thousand ages in Thy sight
Are like an evening gone,
Short as the watch that ends the night
Before the rising sun.

Time, like an ever-rolling stream,
Bears all its sons away;
They fly forgotten, as a dream
Dies at the opening day.

This morning’s hymn text is reprinted under onelicense.net #A-717945. Sing a New Church – words by Delores Dufner, © 2003 GIA Publications, Inc. And Peace Shall Guard You – words by Michael John Trotta, inspired by Philippians 4:6, © 2013 MorningStar Music Publishers, Inc. All rights reserved.

Thank you to Ron Gorveatt – Editor and Sound Technician for his work creating the video of the Fairlawn Avenue United Church Senior Choir section leads’ presentation of Come, I Pray Thee.

W. H. Anderson (1882-1955) was born in England. As a young man he studied in Italy, developing a fine tenor voice. He was the recipient of two scholarships from the London Guild Hall of Music, later becoming the tenor soloist at St. Paul’s Cathedral in London. In 1910 he came to Canada and settled in Winnipeg, where he immediately became part of the musical life of the city as a concert singer, teacher, composer, and choral conductor. Anderson took a great interest in the Winnipeg Music Festival and was chairman of the vocal and choral music selection committee from the Festival’s inception until he died. He composed and arranged approximately 300 pieces – sacred and secular choral anthems, motets, solos and children’s songs – which were published in Canada, England and the United States. Anderson’s works have been performed internationally in Canada, Europe, Great Britain, Australia, the United States, South Korea, and Wales.

William Henry Draper (1855-1933) was an English hymnodist and clergyman who wrote the texts for approximately sixty hymns. He is most famous for All Creatures of Our God and King, his translation of “Canticle of the Sun” by St. Francis of Assisi.

O Be Joyful in the Lord was commissioned by Music Plus Corporation in Kitchener, ON, for their Music Plus Church Choir Festival, and was premiered on May 30, 1999. This morning’s recording, performed by the Senior Choir of Fairlawn Avenue, is from their CD Canticle to the Spirit.

Delores Dufner (b. 1939) is an American sacred music composer, librettist, and organist whose works have been included in Catholic hymnals in the United States, Canada, the United Kingdom and Australia. She is a nun of the Order of Saint Benedict at Saint Benedict’s Monastery in Saint Joseph, Minnesota.

St. Patrick (ca. 386-461) is Ireland’s patron saint, known for spreading Christianity throughout the country during the 5th century. Much of his life is unknown to historians and can’t be verified, though some sources have listed his birth name as Maewyn Succat, with the name Patrick later taken on during his religious journeys. As a youth, he was captured by pirates in his native Britain and brought to Ireland. During his enslavement, he was called to Christianity and escaped his captors after six years. He returned to Ireland as a missionary, and in his teachings combined Irish pagan beliefs with Christian sacrament. Many legends have been associated with his life, including that he drove away all the snakes from Ireland, and that he introduced the Holy Trinity through the three-leaved shamrock.

Isaac Watts (1674-1748) was an English Christian minister, hymn writer, theologian, and logician. He was a prolific and popular hymn writer and is credited with some 750 hymns. He is recognized as the “Godfather of English Hymnody”. Many of his hymns remain in use to this day and have been translated into numerous languages.

The Unforgiving Servant by James B. Janknegt www.bcartfarm.com
Fairlawn Flowers arrangement and photograph by Elaine Perkins 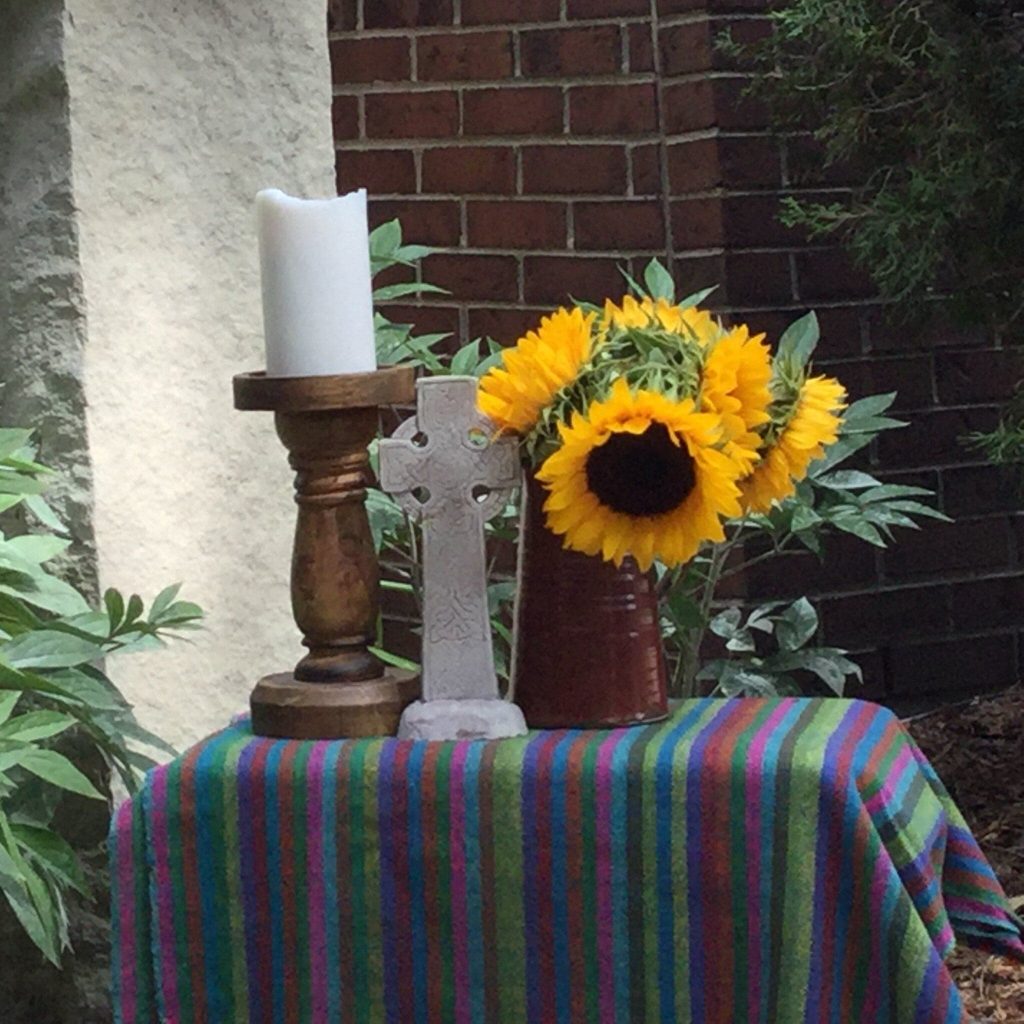