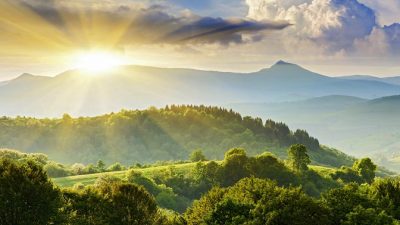 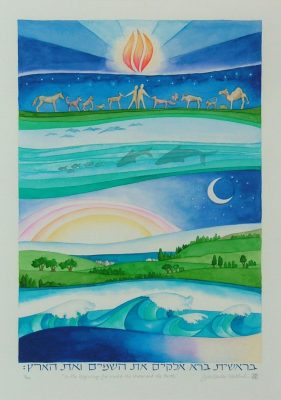 “And the Spirit of God moved upon the face of the waters.”
(Genesis 1:2)

We praise you, O God, our Redeemer, Creator;
In grateful devotion our tribute we bring.
We lay it before you; we kneel and adore you;
We bless your holy name, glad praises we sing.

We worship you, God of our fathers and mothers,
Through trial and tempest, our guide you have been,
When perils o’ertake us, you will not forsake us,
And with your help, oh Lord, our struggles we win.

With voices united our praises we offer,
And gladly our songs of thanksgiving we raise.
With you, Lord, beside us, your strong arm will guide us,
To you, our great Redeemer, forever be praise!
(Julia Cory, 1902, alt.)

When all was dark and endless night,
There was no energy or light.
The universe was conceived when God breathed.

God breathed and planets whirled in space,
The moon and stars were set in place,
And then the sun began to blaze when God breathed.

God blessed the earth abundantly
With living things to swim the sea,
And set all creatures running free,
When God breathed.

God breathed, in the beginning, God breathed.
And all creation came to be.

The birds that dance upon the wing,
And every song they rise to sing,
The joyful music that they bring,
All the music was conceived when God breathed.

God breathed into the human form,
And when humanity was born,
God set the human spirit free when God breathed.

When there was nothing else than night,
God breathed and there was light.
(Pepper Choplin, based on Genesis 1:2-7 and Psalm 33:6)

God is Holy Mystery, beyond complete description.
Yet, in love, the one eternal God seeks relationship.
So God creates the universe and with it the possibility of being and
relating. God tends the universe, mending the broken and reconciling
the estranged. God enlivens the universe, guiding all things toward
harmony with their Source.

Grateful for God’s loving action, we cannot keep from singing.
God is creative and self-giving, generously moving in all the near and
distant corners of the universe. Nothing exists that does not find its
source in God. Our first response to God’s providence is gratitude.
We sing thanksgiving.

Finding ourselves in a world of beauty and mystery, of living things,
diverse and interdependent, of complex patterns of growth and
evolution, of subatomic particles and cosmic swirls, we sing of God the
Creator, the Maker and Source of all that is.

Each part of creation reveals unique aspects of God the Creator, who is
both in creation and beyond it. All parts of creation, animate and
inanimate, are related. All creation is good.

Hymn How Can I Keep From Singing (My Life Flows On)

My life flows on in endless song, above earth’s lamentation.
I hear the real, though far-off hymn that hails a new creation.
No storm can shake my inmost calm, while to that Rock I’m clinging:
Since love prevails in heaven and earth, how can I keep from singing?

While though the tempest round me roars, I know the truth, it liveth.
And though the darkness round me close, songs in the night it giveth.
No storm can shake my inmost calm, while to that Rock I’m clinging,
Since love prevails in heaven and earth, how can I keep from singing?

I lift my eyes; the cloud grows thin; I see the blue above it.
And day by day, this pathway smooths, since first I learned to love it.
No storm can shake my inmost calm, I hear the music ringing.
It sounds an echo in my soul, how can I keep from singing?

Closing Hymn Sing Praise to God, Who Reigns Above

Sing praise to God, who reigns above,
The God of all creation,
The God of power, the God of love,
The God of our salvation;
With healing balm my soul is filled,
And every faithless murmur stilled:
To God all praise and glory!

What God’s almighty power hath made,
God’s gracious mercy keepeth:
By morning glow or evening shade
God’s watchful eye ne’er sleepeth;
Within the kingdom of God’s might,
Lo! All is just and all is right:
To God all praise and glory!

Our God is never far away,
But through all grief distressing,
An ever-present help and stay,
Our peace, and joy, and blessing;
As with a mother’s tender hand,
God gently leads the chosen band:
To God all praise and glory!

Thus all my gladsome way along,
I sing aloud thy praises
That all may hear the grateful song
My voice unwearied raises.
Be joyful in your God, my heart!
Both soul and body take your part:
To God all praise and glory.
(Johann Jacob Schütz, 1675,
trans. Frances Elizabeth Cox, 1841, alt.)

May God give to you as you celebrate this day
Jesus’ peace in your soul, his love in your heart
His grace, forgiveness, joy, strength and hope in your life. Amen.

This morning’s anthem is reprinted under onelicense.net #A-717945. God Breathed – words by Pepper Choplin, © 2014 Lorenz Publishing Co. All rights reserved.

trinitas I is the first movement of a 3 movement work titled trinitas. Each movement is based on a passage of scripture. It was commissioned in 1998 by Lawrence Park Community Church to celebrate the installation of the Florence Grand Casavant pipe organ. Mark Toews, Lawrence Park’s Director of Music, played the premiere performance on October 18, 1998. Eleanor is the organist on this morning’s Prelude. It was recorded in 2001 as part of an Amadeus Choir concert at St. James Cathedral in Toronto.

Julia Cory (1882-1963) was born in New York City and was the daughter of a prominent architect. Her father was also a Sunday school superintendent and amateur hymnologist. Partly because of his influence, Julia began to write hymns at an early age. In her twenties, the organist at Brick Presbyterian Church in New York City asked her to write new words for a traditional Dutch hymn. The original Dutch hymn dates back to the 1600s. Its familiar words “We gather together to ask the Lord’s blessing” are an English rendering of a German version of the Dutch original. Cory’s words express the same theme of thanksgiving to God the Creator, but in a fresh way.

Robert S. Lowry (1826-1899) was an American preacher who became a popular writer of gospel music in the mid to late19th century. His best-known hymns include Shall We Gather at the River, Christ Arose, and How Can I Keep From Singing (also known as My Life Flows On). Despite his protestations that preaching was his main vocation and that music was merely a sideline, it is as a hymn writer that Lowry is chiefly remembered, ranking with such as W.H. Doane and Ira D. Sankey as one of the originators of a musical tradition that has lasted until the modern era. He is credited with the writing of more than 500 hymn tunes, often supplying the text as well as the music – one of the earliest hymn writers to do so.

Joshua Spacht (b. 1980) is an American composer and orchestrator of multi-media and concert music. His style can generally be described as eclectic with “neo-classical” elements. Through the use of synthesizers and programming, Joshua crafts a sound that is intense in its rhythm while leaving room for traditional melody, harmony, and counterpoint. Trained as a classical pianist, he enjoys using classical sounds against a backdrop of contemporary colours and textures. After high school, Joshua moved to Los Angeles where he began his musical studies at The Master’s College before receiving additional training at The University of Washington. He went on to earn a Master Certificate in Arranging & Orchestration from Berklee College of Music in Boston. Joshua has a particular love for choral music and has sought to marry the idiomatic choral sound with modern musical genres.

Johann Jacob Schütz (1640-1990) was a German attorney, who was also known for writing several hymns. The original German text of Sing Praise to God, Who Reigns Above was written by Schütz in 1675. Frances Elizabeth Cox did the English translation in 1841, and the hymn remains in common use to this day.

Francis Elizabeth Cox (1812-1897) was born in Oxford, England. She was among the important English translators of the nineteenth century and a member of the Anglican Church. Together with Catherine Winkworth, she was among the first to rediscover and translate German hymns into English. Her 1841 publication, “Sacred Hymns from the German”, contained 49 translations, together with the original German lyrics and notes on the German authors; it received favourable reviews from both Protestant and Catholic publications. This volume included the well-known Sing Praise to God, Who Reigns Above. The translation was also published simultaneously in “Lyra Eucharistica” and “Hymns from the German” in 1864.

Franz Joseph Haydn (1732-1809) was born in Austria, in a village that at that time stood on the border with Hungary. Familiarly known as “the father of the symphony” he was the first great symphonist and the composer who essentially invented the string quartet. The principal engineer of the classical style, he exerted influence on the likes of Mozart, his student Ludwig van Beethoven and scores of others, including subsequent composers such as Schubert, Mendelssohn and Brahms. The Creation was written between 1796 and 1798 and is considered by many to be his masterpiece. The oratorio depicts and celebrates the creation of the world as described in the Book of Genesis and in John Milton’s “Paradise Lost”. Always an astute businessman, Haydn made two versions of the oratorio – one in German, one in English – and he created slightly different melodic lines to fit the different inflections, stresses, syntax and rhythms of the two languages. When sung in German, the work is known as Die Schöpfung.

We Praise You, O God https://youtu.be/1wYMO9vPXtQ
God Breathed Pepper Choplin (b. 1957) http://www.lorenz.com/Med/Sample/10_4472L.mp3
How Can I Keep From Singing (My Life Flows On) https://youtu.be/VLPP3XmYxXg
In the Beginning Joshua Spacht https://youtu.be/8K4ASclpfF8
Sing Praise to God, Who Reigns Above https://youtu.be/-Z8zU1FGbg0
The Heavens are Telling Franz Joseph Haydn https://www.youtube.com/watch?v=OwqqfbinUDY