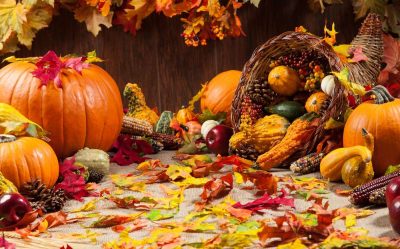 All the world is God’s own field,
Fruit unto his praise to yield,
Wheat and tares together sown
Unto joy or sorrow grown:
First the blade and then the ear,
Then the full corn shall appear:
Grant, O harvest Lord, that we
Wholesome grain and pure may be.

For the Lord our God shall come,
And shall take his harvest home;
From his field shall in that day,
All offenses purge away;
Give his angels charge at last
In the fire the tares to cast,
But the fruitful ears to store
In his garner evermore.

Even so, Lord, quickly come
To thy final harvest-home!
Gather thou thy people in,
Free from sorrow, free from sin;
There forever purified
In thy presence to abide:
Come, with all thine angels, come,
Raise the glorious harvest-home!
(Henry Alford, 1810-1871)

All people that on earth do dwell,
Sing to the Lord with cheerful voice.
Him serve with mirth, His praise forth tell,
Come ye before Him and rejoice.

Know that the Lord is God indeed;
Without our aid He did us make;
We are His folk, He doth us feed,
And for His sheep He doth us take.

O enter then His gates with praise,
Approach with joy His courts unto;
Praise, laud, and bless His name always,
For it is seemly so to do. Amen.
(Based on Psalm 100,
ascribed to William Kethe, ca. 1530-1594)

Benedictus Dominus: Lord, we thank you for all creation,
we worship you, we honour you, we bless your Holy Name forever.

Lord, you were there before the hills and mountains,
you formed the earth, you made the sea and sky;
you are God, our strength and our salvation
through a thousand ages passing by.
The earth is yours, and all that is within it,
you gave it life and ev’ry gift so fair;
in the wealth and wonder of creation
you were there, Lord, you were there.

Lord, we are called as servants in your kingdom
to do your work, and not to seek for rest,
share each load, and bear each other’s burdens,
that our lives may be forever blest.
Lord, you are there in gentleness and goodness,
in kindly thoughts and quiet words of prayer:
in the love which binds us all together
you are there, Lord, you are there.

Look at the World was written in celebration of the 70th anniversary of the Council for the Protection of Rural England.

George Job Elvey (1816-1893) was an English organist, composer, choirmaster, and teacher. He was born in Canterbury into a family with a long musical history, and, as a young boy, was a chorister at Canterbury Cathedral. Living and studying with his brother Stephen, he was educated at Oxford, and at the Royal Academy of Music in London, and at age 19, he was appointed Organist and Master of the Choristers at St. George’s Chapel, beating more experienced candidates such as Samuel Wesley to the post. Elvey held this position for 47 years, making him one of the longest service organists in the Chapel’s history. As well as taking charge of the choir and playing the organ, he gained a BMus and DMus from New College, Oxford. Renowned for his dramatic performances of the works of Handel, he was also a prolific composer of hymn tunes, anthems, oratorios, and service music – many of his pieces were composed for specific ceremonies and performed only once. During his time at St. George’s, Elvey was also appointed as Private Organist to Queen Adelaide (wife of William IV), and later to Queen Victoria. He was knighted in 1871 to recognize his work as an organist and composer; most specifically for the Festival March he wrote to be performed at the wedding of Princess Louise, the sixth child of Queen Victoria. Elvey’s hymn tune St. George’s, Windsor (sung to the text “Come, Ye Thankful People, Come) remains a very popular thanksgiving/harvest hymn that is still widely used in Christian services today.

Henry Alford (1810-1871) was an English churchman, theologian, scholar, poet, hymnodist, and writer. He studied at Trinity College, Cambridge, and in 1834, was made a fellow of the college. Alford was also a talented artist and he had abundant musical and mechanical talent. Besides editing the works of John Donne, and translating the Odyssey, he published several volumes of his own verse. His best known hymn text is “Come, Ye Thankful People, Come”, but his chief fame rests on his monumental edition of the New Testament in Greek (8 volumes), which occupied him from 1841-1861.

Psalm 100 was written for the Fairlawn Senior Choir in 1989, and was originally performed with the choir singing Choir 1 and a brass quartet playing Choir 2.

William Kethe (ca. 1530-1594) is thought to have been Scots-born, although this has never been confirmed. A Protestant, he fled to the continent during Queen Mary’s persecution in the 1550s. He lived in Geneva for some time, but travelled to Basel and Strasbourg to maintain contact with other English refugees. Kethe helped translate the Geneva Bible in 1560 and contributed twenty-five psalm versifications to the 1561 Anglo-Genevan Psalter. Only ten of these were retained in the 1562 English Psalter, while the 1564 Scottish Psalter kept all twenty-five. His version of the text of this morning’s Psalm 100 anthem (The Old Hundredth) is universally known as “All People That On Earth Do Dwell”.

Johann Abraham Peter Schulz (1747-1800) was a German composer and musician. He was born in Lüneburg and studied in Berlin, followed by extensive travels as an accompanist and teacher. Schulz wrote operas, oratorios, cantatas, and stage music, as well as folk songs and piano pieces; he also wrote articles on music theory. He is perhaps best known as the composer of the music for Matthias Claudius’s poem “Wir Pflügen und Wir Streuen” (“We Plough the Fields and Scatter”).

Matthias Claudius (1740-1815) was a German poet and journalist, otherwise known by the pen name of ‘Asmus’. His poem “Wir Pflügen und Wir Streuen” (“We Plough the Fields and Scatter”), set to music by Johann Abraham Peter Schulz, is a popular harvest festival hymn, sung widely in German and English speaking churches throughout the world.

Jane Montgomery Campbell (1817-1878) was an English writer, poet, musician, and teacher. Born in the village of Paddington in Middlesex, she was the daughter of Church of England clergyman the Rev. A. Montgomery Campbell, and taught children’s choirs in her father’s parish school. She authored “A Handbook for Singers”, which was comprised of musical exercises based on her teaching experience, and which she taught her pupils. Montgomery Campbell was also a gifted linguist and German scholar, whose translations appeared in 1862 in “A Garland of Songs: or, an English Liederkranz”. Contained in this collection is her best known and most widely used translation of the quintessential harvest hymn for Victorians and their successors – “Wir Pflügen und Wir Streuen” (“We Plough the Fields and Scatter”).

Johann Crüger (1598-1662) was one of the most distinguished German musicians of his time, and was an important figure in generating renewed interest to the Protestant chorale tradition. He composed original melodies, arranged old ones, and collected forgotten or little-known ones and set them to chorale texts. The melody that he composed for Martin Rinkart’s popular German hymn text “Nun danket alle Gott” (“Now Thank We All Our God”), is said to be one of the most recognized tunes in the world. Almost nothing is known about his early years and musical education, but after a period of travel to Austria and Hungary in 1615, he settled in Berlin to become a private tutor to a wealthy family, and to focus on composing and arranging. The following year he enrolled at the University of Wittenberg to study theology. In 1622, Crüger secured two posts – the first as a teacher at Grauen Kloster Gymnasium, and the second as cantor, organist, and chapel-master at St. Nicholas Church in Berlin – a position he held until his death. During the Thirty Years’ War, Crüger and his family endured many hardships including hunger. He fell ill with plague, and almost died of that disease, losing five children and his wife in 1636. In 1637, having recovered from his illness, he got married a second time, to the daughter of an innkeeper, with whom he had fourteen children, and most of whom tragically died at a young age.

Martin Rinckart (1586-1649) was a German Lutheran clergyman and hymnist. He is best known for the text to “Now Thank We All Our God” (Nun Danket Alle Gott), which was written around 1636. It was set to music by Johann Crüger in 1647, and translated into English in the 19th century by Catherine Winkworth.

Johann Sebastian Bach (1685-1750) was a German composer of the Baroque period (ca. 1600-1750). He lived in Protestant north Germany in the days when music there made up an important part of the splendour of courts, of religious observance, and the daily happiness of the people. Over the course of his life, he held numerous posts: choir-boy, violinist in the orchestra of a prince, organist of town churchs, and chief court musician. His last position was as music director at the St. Thomas Church and School in Leipzig, of which city his name is chiefly connected, since he remained there for almost the last thirty years of his life. He played many instruments, and as a clavichordist, harpsichordist, and organist, was supreme in his day. He was an extremely prolific composer and produced monumental instrumental compositions as the Art of the Fugue, the Brandenburg Concertos, and the Goldberg Variations, as well as cantatas, motets, sacred songs and arias, sonatas, concertos, suites, and an enormous amount of organ and other keyboard music. Two of Bach’s best known large choral works are the St. Matthew Passion and the Mass in B Minor, and since the 19th-century Bach revival, in no small part, thanks to Felix Mendelssohn, he is now regarded as one of the greatest composers of all time. Bach was twice married, and the parent of twenty (!) children, several of whom were also musicians.