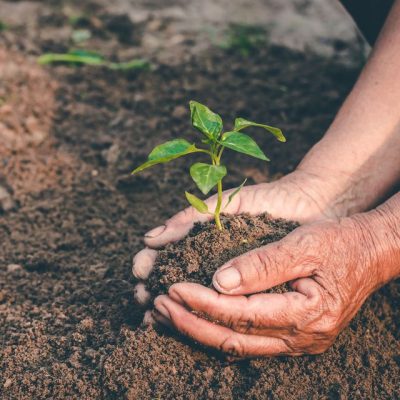 O praise ye the Lord! Sing praise in the height;
Rejoice in his word, ye angels of light;
Ye heavens, adore him by whom ye were made,
And worship before him in brightness arrayed.

O praise ye the Lord, all things that give sound;
Each jubilant chord re-echo around;
Loud organs, his glory forth tell in deep tone,
And sweet harp, the story of what he hath done.

Rise up, my love, my fair one, and come away;
For lo, the winter is past, the rain is over and gone.
The flow’rs appear on the earth,
The time of the singing of birds is come.
(Song of Solomon 2:10b-12a)

When seed falls on good soil, it’s born through quiet toil;
Where soil receives, the earth conceives
The blade, the stem, the fruit, the leaves.
Good soil, O mother earth, the womb, where seed takes birth.

God’s Word in Christ is seed; good soil its urgent need;
For it must find in humankind
The fertile soil in heart and mind.
Good soil! A human field! A hundredfold to yield.

Plough up the trodden way, and clear the stone away;
Tear out the weed, and sow the seed.
Prepare our hearts your Word to heed,
That we good soil may be. Begin, O Lord, with me!
(Norman P. Olsen, 1976)

Wherever you go, sow a seed along the way.
A seed of love, however small it be,
May one day grow into a tree.

Wherever you go, sow a seed along the way.
A seed of faith, however small it be,
May one day grow into a tree.

Closing Hymn All My Hope on God is Founded

This morning’s hymn text is reprinted under onelicense.net #A-717945. When Seed Falls on Good Soil – words by Norman P. Olsen, © Augsburg Fortress. All rights reserved.

Georg Philipp Telemann (1681-1767) was a German Baroque composer and multi-instrumentalist. Almost completely self-taught in music, he entered the University of Leipzig to study law, but eventually settled on a career in music, against his family’s wishes. He held important positions in a number of German cities before settling in Hamburg in 1721, where he became musical director of that city’s five main churches. One of the most prolific composers in history (at least in terms of surviving works), Telemann was considered by his contemporaries to be one of the leading German composers of the time, and was compared favourably both to his friend Johann Sebastian Bach, and to George Frederic Handel, whom he also knew personally. His music incorporates French, Italian, and German national styles, and he was at times even influenced by Polish popular music. Telemann’s enormous output, perhaps the largest of any classical composer in history, includes parts of at least 31 cantata cycles, many operas, concertos, oratorios, songs, music for civic occasions and church services, passions, orchestral suites and abundant amounts of chamber music – his music stands as an important link between the late Baroque and early Classical styles.

Henry Williams Baker (1821-1877) was an English hymn writer. He was born in London, and educated at Trinity College, Cambridge, where he graduated B.A. 1844, and M.A. 1847. From 1851 until his death in 1877 he was Vicar of Monkland, Herefordshire, during which time he rendered the Church great service by editing “Hymns Ancient and Modern,” one of the most popular of modern hymn-books, to which he contributed a number of original hymns, metrical litanies, and translations. The text of this morning’s opening hymn is a paraphrase of Psalm 150.

Rise Up, My Love was composed for the wedding of Jay and Cindy Daley in 1988. Originally scored for organ and solo voice, it was transposed and revised for piano and men’s voices, and sung by the men of Fairlawn Avenue Senior Choir at the wedding reception of Gary and Weili Poole in July, 2012. The piano bed track heard in this morning’s virtual musical offering is from Special Music Sunday, April 28, 2013.

Norman P. Olsen (b. 1952) is an American Lutheran pastor. He was born in New Jersey to Norwegian immigrants and later went to Minnesota to attend Concordia College, Moorhead, and Luther Seminary in St. Paul. He served in several parishes in Minnesota, and while at Grace Lutheran in Luverne, he collaborated with his choir director to write some hymns, the best known of which is “When Seed Falls on Good Soil.”