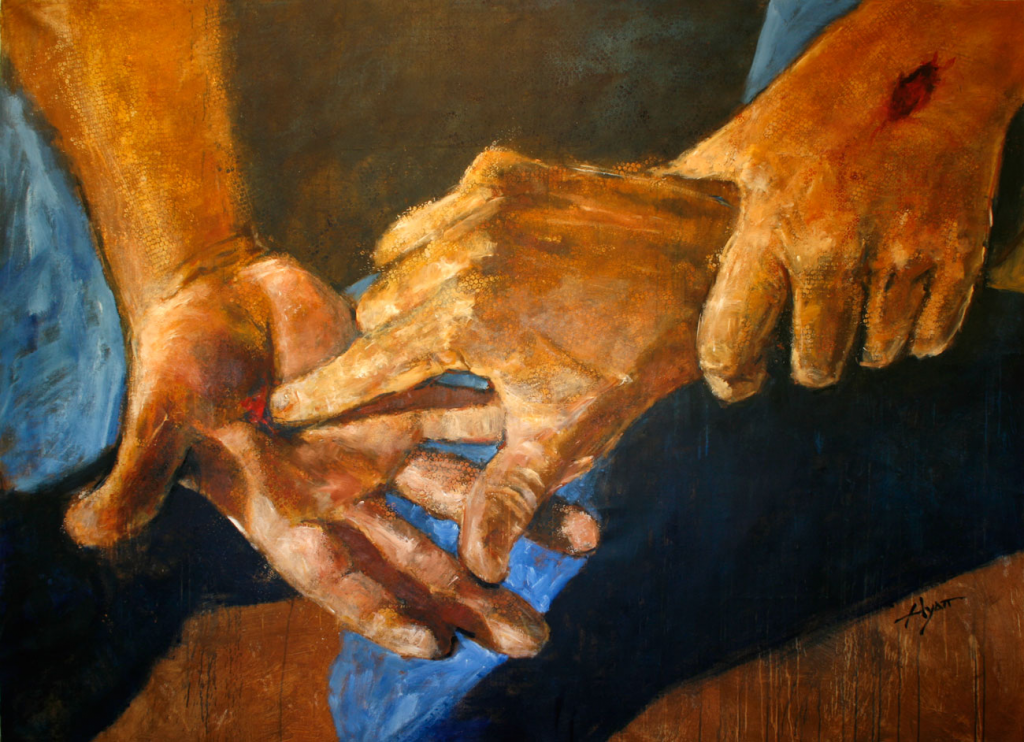 I know that my Redeemer liveth,
and that he shall stand at the latter day upon the earth.
And though worms destroy this body,
yet in my flesh shall I see God.
For now is Christ risen from the dead,
the first-fruits of them that sleep.
(Job 19:25-26, I Cor. 15:20)

Now the green blade riseth from the buried grain,
Wheat that in dark earth many days has lain;
Love lives again, that with the dead has been:
Love is come again, like wheat that springeth green.

In the grave they laid him, Love whom men had slain,
Thinking that never he would wake again,
Laid in the earth like grain that sleeps unseen:
Love is come again, like wheat that springeth green.

Forth he came at Easter, like the risen grain,
He that for three days in the grave had lain,
Quick from the dead my risen Lord is seen:
Love is come again, like wheat that springeth green.

When our hearts are wintry, grieving, or in pain,
Thy touch can call us back to life again,
Fields of our hearts that dead and bare have been:
Love is come again, like wheat that springeth green.
(John M. C. Crum, 1872-1958)

Most glorious Lord of life, that on this day,
Didst make thy triumph over death and sin:
And having harrow’d hell, didst bring away
Captivity thence captive, us to win:
This joyous day, dear Lord, with joy begin,
And grant that we for whom thou diddest die,
Being with thy dear blood clean wash’d from sin,
May live for ever in felicity.
And that thy love we weighing worthily,
May likewise love thee for the same again:
And for thy sake, that all like dear didst buy,
With love may one another entertain.
So let us love, dear love, like as we ought,
Love is the lesson which the Lord us taught.
(Edmund Spenser ca. 1552-1599)

Hymn The Day of Resurrection

The day of resurrection! Earth tell it out abroad;
The passover of gladness, the passover of God!
From death to life eternal, from earth unto the sky,
Our Christ hath brought us over with hymns of victory.

Our hearts be pure from evil, that we may see aright
The Lord in rays eternal of resurrection light,
And listening to his accents, may hear so calm and plain
His own “All hail!”, and hearing, may raise the victor strain.

Now let the heavens be joyful! Let earth the song begin!
The round world keep high triumph, and all that is therein!
Let all things seen and unseen their notes of gladness blend,
For Christ the Lord hath risen, our joy that hath no end.
(John of Damascus ca. 750, trans. John Mason Neale 1862)

That Easter morn, at break of day,
The faithful women went their way
To seek the tomb where Jesus lay.
Alleluia!

An angel clad in white they see,
Who sat and spake unto the three,
“Your Lord doth go to Galilee.”
Alleluia!

That night the apostles met in fear;
Amidst them came their Lord most dear,
And said, “My peace be on all here.”
Alleluia!

How blest are they who have not seen,
And yet whose faith has constant been,
For they eternal life shall win.
Alleluia!

Your name we bless, O risen Lord,
And sing today with one accord
The life laid down, the life restored:
Alleluia, alleluia, alleluia!
(Cyril Argentine Alington, 1872-1955)

George Frideric Handel (1685-1759) was born in Halle, Germany. One of the most prolific, successful and revered composers and musicians of the Baroque period, he is to this day considered to be one of the greatest composers of that era, enjoying both public favour and royal patronage during his lifetime. Despite his eagerness to become a musician, he was disallowed by his father, and so had to conduct his musical training in secret. After spending a brief spell in Italy studying law to appease his father, but at the same time expanding his musical pursuits while out of his father’s control and knowledge, Handel was appointed as Kapellmeister for Prince George of the German Hanoverian family in 1710. He moved with Prince George to London, England, where the prince was crowned King George I of Great Britain and Ireland. In 1712 he decided to settle in England permanently, receiving an annual income of £200 from the royal family. His compositional output was immense: 42 operas, 29 oratorios (including Messiah, which has taken its rightful place as one of the most frequently performed and most beloved choral works of all time), more than 120 cantatas, duets, trios, arias, anthems, chamber music, organ works, sonatas and concertos. Three days before his death in 1759 Handel signed a codicil to his will saying he hoped he might be buried in Westminster Abbey, and desired that his executor erect a monument for him. The funeral was attended by about 3,000 people and the choirs of Westminster Abbey, St Paul’s Cathedral and the Chapel Royal sang the service. His black marble gravestone in the south transept reads: GEORGE FREDERIC HANDEL BORN YE 23 FEBRUARY 1685 DIED YE 14 OF APRIL 1759.

Most Glorious Lord of Life was commissioned in 2011 by Christ Church, Cambridge, Massachusetts, in celebration of the 250th anniversary of the dedication of the church.

Edmund Spenser (c.1552-1599) was an English poet, born in London. Little is known about his family or his childhood, except that he received a scholarship to attend the Merchant Taylor School, where he likely studied Latin and Greek. He went on to study literature and religion at Cambridge University’s Pembroke Hall, receiving a BA in 1573 and an MA in 1576. Alongside his poetry, Spenser pursued a career in politics, and along the way he met other poets and artists in the court of Queen Elizabeth I. Most Glorious Lord of Life is the 68th poem in his sonnet sequence “Amoretti”. The poem is a joyous celebration of the Easter festival and the meaning behind it. Spenser died in London in 1599 and was buried in Poet’s Corner in Westminster Abbey.

John Mason Neale (1818-1866) was an English priest and scholar, best known as a hymn writer and translator, having enriched English hymnody with many ancient and medieval hymns translated from Latin and Greek. He studied at Cambridge, and was ordained to the priesthood in 1842. He was offered a parish, but chronic ill health, which was to continue throughout his life, prevented him from taking it. In 1854 Neale co-founded the Sisterhood of St. Margaret, an order of women in the Anglican Church dedicated to nursing the sick. Many Anglicans in his day, however, were very suspicious of anything suggestive of Roman Catholicism. Once Neale was attacked and mauled at a funeral of one of the sisters. From time to time unruly crowds threatened to stone him or to burn his house. He received no honour or preferment in England, and his doctorate was bestowed by an American college (Trinity College, Hartford, Connecticut). However, his basic goodness eventually won the confidence of many who had fiercely opposed him, and the Sisterhood of St. Margaret survived and prospered.

Jean Tisserand (?-1494) was a Franciscan friar, working in Paris in the late 15th century. The authorship of O Sons and Daughters (titled O Filii et Filiae in the original Latin), was uncertain for many years, but is now attributed to Tisserand, as established by the French musicologist and composer Amédéé Gastoué (1873-1943) in 1907.

Cyril Argentine Alington (1872-1955) was an English educator, scholar, cleric, and author. Educated at Marlborough College and Trinity College, Oxford, he was later the headmaster of Shrewsbury School and Eton College, and also served as chaplain to King George V. Alington wrote more than 50 books, including works on religion, history, poetry, and a series of detective novels. He also wrote several popular hymns texts, including Good Christian Men, Rejoice and Sing (now altered in many hymn books to Good Christians All, Rejoice and Sing.)

It was still the first day of the week. That evening, while the disciples were behind closed doors because they were afraid of the Jewish authorities, Jesus came and stood among them. He said, “Peace be with you.” After he said this, he showed them his hands and his side. When the disciples saw the Lord, they were filled with joy. Jesus said to them again, “Peace be with you. As the Father sent me, so I am sending you.” Then he breathed on them and said, “Receive the Holy Spirit. If you forgive anyone’s sins, they are forgiven; if you don’t forgive them, they aren’t forgiven.”

Thomas, the one called Didymus, one of the Twelve, wasn’t with the disciples when Jesus came. The other disciples told him, “We’ve seen the Lord!”

But he replied, “Unless I see the nail marks in his hands, put my finger in the wounds left by the nails, and put my hand into his side, I won’t believe.”

After eight days his disciples were again in a house and Thomas was with them. Even though the doors were locked, Jesus entered and stood among them. He said, “Peace be with you.” Then he said to Thomas, “Put your finger here. Look at my hands. Put your hand into my side. No more disbelief. Believe!”

Thomas responded to Jesus, “My Lord and my God!”

Jesus replied, “Do you believe because you see me? Happy are those who don’t see and yet believe.”