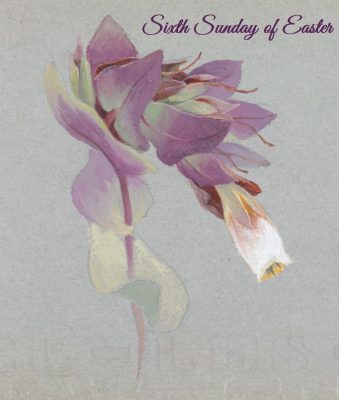 Rise up, my love, my fair one, and come away;
For lo, the winter is past, the rain is over and gone.
The flow’rs appear on the earth,
The time of the singing of birds is come.
(Song of Solomon 2:10-12a)

Opening Hymn Praise to the Lord, the Almighty

And so we sing of God the Spirit
who from the beginning has swept over the face of creation,
animating all energy and matter
and moving in the human heart.

We sing of God the Spirit,
faithful and untameable,
who is creatively and redemptively active in the world.

The Spirit challenges us to celebrate the holy not only in what is familiar
but also in that which seems foreign.

The Spirit breathes revelatory power into scripture,
bestowing upon it a unique and normative place in the life of the community.
The Spirit judges us critically when we abuse scripture by interpreting it narrow-mindedly,
using it as a tool of oppression, exclusion, or hatred.

We sing of the Spirit,
who speaks our prayers of deepest longing
and enfolds our concerns and confession,
transforming us and the world.

Help me spread your fragrance wherever I go.
Flood my soul with Your Spirit and life.
Penetrate and possess my whole being so utterly
That my life may be only a radiance of Yours.
Shine through me, and be so in me
That every soul I know will feel Your presence in my soul.
Let them look up and see no longer me, but only You. Amen.
(From the Daily Prayer of Mother Teresa, 1910-1997)

Hymn The King of Love My Shepherd Is

The King of love my shepherd is,
Whose goodness faileth never;
I nothing lack if I am his
And he is mine forever.

Where streams of living water flow
My ransomed soul he leadeth,
And where the verdant pastures grow
With food celestial feedeth.

Perverse and foolish oft I strayed;
But yet in love he sought me,
And on his shoulder gently laid,
And home rejoicing brought me.

In death’s dark vale I fear no ill
With thee, dear Lord, beside me;
Thy rod and staff my comfort still,
Thy cross before to guide me.

Thou spread’st a table in my sight;
Thy unction grace bestoweth;
And O what transport of delight
From thy pure chalice floweth!

And so through all the length of days
Thy goodness faileth never:
Good shepherd, may I sing thy praise
Within thy house for ever!
(Henry Williams Baker, 1821-1877,
based on Psalm 23)

Closing Hymn Lord, You Give the Great Commission

Lord, you give the great commission:
“Heal the sick and preach the word.”
Lest the church neglect its mission,
And the gospel go unheard,
Help us witness to your purpose
With renewed integrity;
With the Spirit’s gifts empow’r us
For the work of ministry.

Lord, you bless with words assuring:
“I am with you to the end.”
Faith and hope and love restoring,
May we serve as you intend,
And, amid the cares that claim us,
Hold in mind eternity;
With the Spirit’s gifts empow’r us
For the work of ministry.
(Jeffery W. Rowthorn, 1978)

May the road rise to meet you,
may the wind be ever at your back,
may the sun shine warm upon your face,
and the rain fall soft upon your fields.
And until we meet again, may God hold you,
ever in the palm of his hand.
(Traditional Irish)

This morning’s Anthem and Closing Hymn texts are reprinted under onelicense.net #A-717945. Prayer – words by Mother Teresa of Calcutta, used by permission of the Mother Teresa Centre, music arrangement © 2009 Roger Dean Publishing Co. Lord, You Give the Great Commission, words by Jeffery W. Rowthorn, © 1978 Hope Publishing Company. All rights reserved.

Rise Up, My Love was composed for the wedding of Jay and Cindy Daley in 1988. Originally scored for organ and solo voice, it was transposed and revised for piano and men’s voices and sung by the men of Fairlawn Avenue Senior Choir at the wedding reception of Gary and Weili Poole in July 2012. This morning’s recording is from Special Music Sunday, April 28, 2013.

René Clausen (b. 1953) is an American composer and professor of music at Concordia College in Moorhead, Minnesota. His works are widely performed by high school and church choirs, and have been performed and recorded by many college and professional choirs. Clausen is a frequent guest conductor, guest composer and lecturer, both nationally and internationally.

Mother Teresa of Calcutta (1910-1997) was a Roman Catholic nun from the Republic of Macedonia who adopted India as her country of service. She dedicated her life to the service of the poor, the ailing, and the destitute through the Missionaries of Charities, an order of Roman Catholic nuns, in Calcutta, India. She once said, “Love cannot remain by itself – it has no meaning. Love has to be put into action, and that action is service.” Her work transcended geo-political borders and she encompassed the whole of humanity in her healing embrace. Her work was recognized through numerous international and national awards and recognitions. She was canonized at a ceremony in St. Peter’s Square at the Vatican by Pope Francis on September 4, 2016, and came to be known as Saint Teresa of Calcutta.

Henry Williams Baker (1821-1877) was an English hymn writer. He was born in London, and educated at Trinity College, Cambridge, where he graduated B.A. 1844, and M.A. 1847. From 1851 until his death in 1877 he was Vicar of Monkland, Herefordshire, during which time he rendered the Church great service by editing “Hymns Ancient and Modern,” one of the most popular of modern hymn-books, to which he contributed a number of original hymns, metrical litanies, and translations. Baker’s most widely used hymn is The King of Love My Shepherd Is, the third verse of which formed his dying words, according to his friend and fellow hymn writer, John Ellerton.

Jeffery W. Rowthorn (b. 1934) was born in Wales and educated at Cambridge and Oxford. He taught at Union Theological Seminary in New York City and then at Yale Divinity School in New Haven, Connecticut. In 1973, he helped establish the Institute of Sacred Music at Yale University. His last appointment was Bishop in Charge of the Convocation of American Episcopal Churches in Europe, and his office was at the American Cathedral in Paris. He retired from this position in 2001. He has been writing hymns for three decades, and one of his most popular – Lord, You Give the Great Commission can be found in many hymnals.