Stepping Out of the Boat 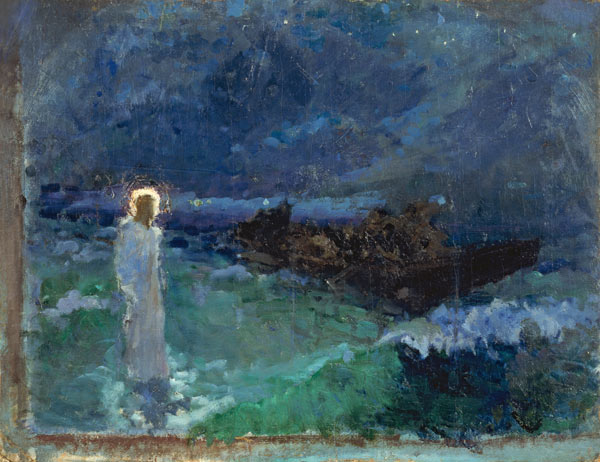 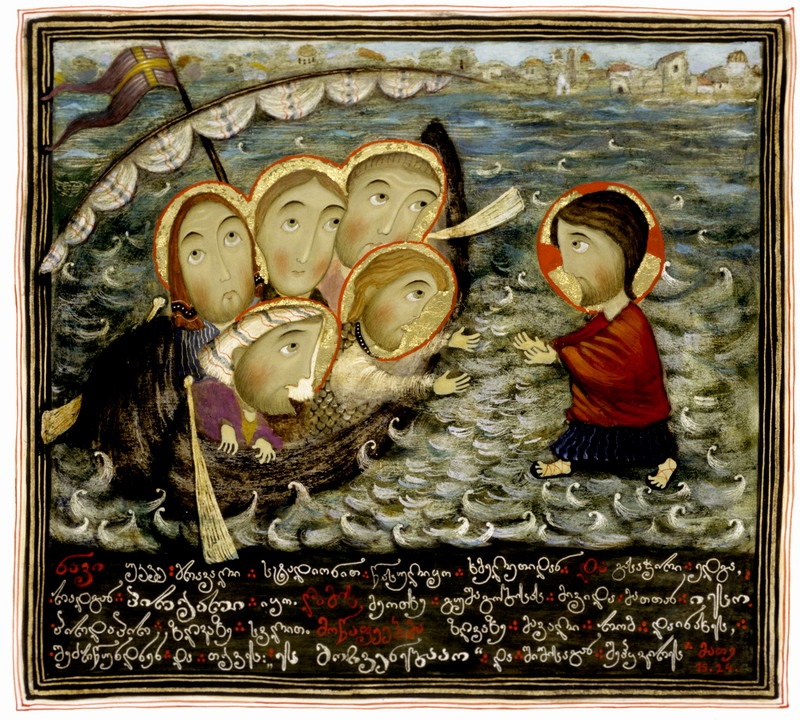 Dear Lord and Father of mankind,
Forgive our foolish ways;
Re-clothe us in our rightful mind;
In purer lives thy service find,
In deeper reverence, praise.

In simple trust like theirs who heard,
Beside the Syrian sea,
The gracious calling of the Lord,
Let us, like them, without a word
Rise up, and follow thee.

O Sabbath rest by Galilee!
O calm of hills above,
Where Jesus knelt to share with thee
The silence of eternity,
Interpreted by love!

Drop thy still dews of quietness,
Till all our strivings cease;
Take from our souls the strain and stress,
And let our ordered lives confess
The beauty of thy peace.

Breathe through the heats of our desire
Thy coolness and thy balm;
Let sense be dumb, let flesh retire:
Speak through the earthquake, wind, and fire,
O still small voice of calm!
(John Greenleaf Whittier, 1807-1892)

You are my refuge and my strength,
You are my shelter from the storm.
I will not fear when the ground shakes,
Or mountains fall into the sea.
I will not fear when oceans roar,
Or mountains shake from swelling tide.
There is a river filled with life,
A sacred place in which you dwell.
Within its streams I find you there.
I find your help at break of dawn.
Though nations fear and kingdoms fade,
Your voice brings hope when morning comes.
You are with me,
You are my fortress and strength!
Be still and know that I am.
Be still and know.
(Based on Isaiah 46)

Jesus calls us; o’er the tumult
Of our life’s wild restless sea.
Day by day his sweet voice soundeth,
Saying, “Christian, follow me.”

As of old Saint Andrew heard it
By the Galilean lake,
Turned from home and toil and kindred,
Leaving all for his dear sake.

Jesus calls us from the worship
Of the vain world’s golden store,
From each idol that would keep us,
Saying, “Christian, love me more.”

In our joys and in our sorrows,
Days of toil and hours of ease,
Still he calls, in cares and pleasures,
“Christian, love me more than these.”

Jesus calls us: by thy mercies,
Saviour, make us hear thy call,
Give our hearts to thine obedience,
Serve and love thee best of all.
(Cecil Frances Alexander, 1823-1895)

When you walk through a storm,
Keep your head up high,
And don’t be afraid of the dark.
At the end of the storm is a golden sky,
And the sweet, silver song of a lark.
Walk on through the wind,
Walk on through the rain,
Though your dreams be tossed and blown.
Walk on, walk on
With hope in your hearts,
And you’ll never walk alone,
You’ll never walk alone.
(Oscar Hammerstein II, 1895-1960)

Lead us, heavenly Father, lead us
O’er the world’s tempestuous sea;
Guard us, guide us, keep us, feed us,
For we have no help but thee;
Yet possessing every blessing
If our God our Father be.

Saviour, breathe forgiveness o’er us;
All our weakness thou dost know;
Thou didst tread this earth before us,
Thou didst feel its keenest woe;
Self denying, death defying.
Thou to Calvary didst go.

Spirit of our God, descending,
Fill our hearts with heavenly joy.
Love with every passion blending,
Pleasure that can never cloy;
Thus provided, pardoned, guided,
Nothing can our peace destroy.
(James Edmeston, 1791-1867)

Have courage, my soul
And let us journey on.
Though the night is dark
And I am far from home.
Thanks be to God
The morning light appears.
The storm is passing over. Hallelu.
(Charles Albert Tindley, 1851-1933)

Vernon J. Charlesworth (1839-1915) was a British pastor who over the course of his life time preached not just in London, England, but also in Australia and Canada. In 1869 he was appointed as the headmaster of Charles Spurgeon’s Stockwell Orphanage at Lambeth near London, England, where he remained until his death. This was a home which had been started two years earlier for fatherless children to be able to live without charge, and be given shelter, food, clothing, care, instruction, and education, and was open to orphans of all religious backgrounds as an alternative to “poor houses”, where orphans and the poor were used as slaves for businesses and given very inadequate and abusive care. The words for A Shelter in the Time of Storm were written circa 1880. The original hymn was set to a weird, minor tune, and around 1885, Ira D. Sankey discovered the words written by Charlesworth and decided to compose a more practical melody to it for church use.

John Greenleaf Whittier (1807-1892) was an American poet and editor who, in the latter part of his life, shared with the great poet Henry Wadsworth Longfellow the distinction of being a household name in both England and the United States. A Quaker devoted to social causes and reform, Whittier worked passionately for a number of abolitionist newspapers and magazines. He founded the antislavery Liberal party in 1840, and ran for Congress in 1842. While his critics never considered him to be a great poet, they thought him a noble and kind man whose verse gave unique expression to ideas they valued. From 1865 until his death, Whittier wrote of religion, nature, and rural life.

Cecil Frances Alexander (1818-1895) was an Anglo-Irish hymnodist and poet. “All Things Bright and Beautiful“, “There Is a Green Hill Far Away“, and the Christmas carol “Once in Royal David’s City” are three of her most well known hymn texts.

You’ll Never Walk Alone is one of the iconic songs from Carousel – the second musical by the team of Richard Rodgers and Oscar Hammerstein II.

Richard Rodgers (1902-1979) was an American composer, known largely for his work in musical theatre. With 43 Broadway musicals and over 900 songs to his credit, he was one of the most significant American composers of the 20th century. He is best known for his songwriting partnerships with the lyricist Lorenz Hart, with whom he wrote several musicals throughout the 1920s and 1930s, including Pal Joey, A Connecticut Yankee, On Your Toes and Babes in Arms, and Oscar Hammerstein II, with whom he wrote musicals through the 1940s and 1950s such as Oklahoma!, Carousel, South Pacific, The King and I, and The Sound of Music. His collaborations with Hammerstein, in particular, are celebrated for bringing the Broadway musical to a new maturity by telling stories that were focused around characters and drama rather than the light-hearted entertainment that the genre was known for beforehand. Rodgers was the first person to win what is considered the top American entertainment awards in television, recording, movies, and Broadway – an Emmy, a Grammy, an Oscar, and a Tony Award — now known collectively as an EGOT. In addition, he was awarded a Pulitzer Prize, making him one of only two people to receive all five awards (Marvin Hamlisch is the other). In 1978, Rodgers was awarded “The Kennedy Center Honors” for his lifetime achievement in the arts.

Oscar Hammerstein II (1895-1960) was an American lyricist, librettist, theatrical producer, and (usually uncredited) director in the musical theater for almost 40 years. His father, William, managed a vaudeville theater, while his grandfather, Oscar Hammerstein I, was a famed opera impresario. Hammerstein’s uncle Arthur was a successful producer of Broadway musicals. Although he wrote the groundbreaking musical Showboat with composer Jerome Kern in 1927, he is best known for his collaborations with composer Richard Rodgers, as the duo Rodgers and Hammerstein, whose musicals include Oklahoma!, Carousel, South Pacific, The King and I, and The Sound of Music. The celebrated pair also worked on film adaptions of their work and garnered many top awards including two Pulitzers, multiple Academy and Tony awards, and two Grammys. Described by Stephen Sondheim as an “experimental playwright”, Hammerstein helped bring the American musical to new maturity by popularizing musicals that focused on stories and characters rather than the lighthearted entertainment that the musical had been known for beforehand. Over the course of his career, he co-wrote some 850 songs.

James Edmeston (1791-1867) was an English architect and surveyor by profession; he was also known as a prolific writer of church hymns. He served as the church warden at St. Barnabas Church in Homerton, Middlesex, and was a strong supporter of, and frequent visitor to the London Orphan Asylum. Edmeston is said to have written some 2,000 hymns, one each Sunday for many years. Although few remain in use today, one that is still found in many hymnals is his Lead Us, Heavenly Father, Lead Us.

Charles Albert Tindley (1851-1933) is considered one of the fathers of modern Black gospel music. He wrote more than 60 hymns and gospel songs, including I’ll Overcome Someday, which later became the significant Civil Rights anthem We Shall Overcome. The Storm Is Passing Over was published in a collection of Tindley’s songs in 1905. The son of slaves, Tindley was born free in Maryland but worked as a hired plantation worker in Maryland alongside slaves for much of his youth. After the Civil War, he moved to Philadelphia, one of many who left rural life for the hope and promise of urban centres. In the evenings, he enlisted the help of tutors to learn to read not only English, but also Greek and Hebrew. Eventually, he became the pastor of the Methodist church where he was first a janitor. It still has an active congregation today, now known as the Tindley Temple United Methodist Church in Philadelphia. Tindley is equally remembered as a tremendous preacher and an activist for racial equality and social injustice.

Barbara Wesley Baker (b. 1948) is an internationally noted conductor and educator. She currently conducts the Women’s, Men’s, Concert Chorale, Gospel, and Chamber Choirs at Eleanor Roosevelt High School in Greenbelt, Maryland, and for 24 years has directed the Gospel Choir at Colesville United Methodist Church in Silver Spring, Maryland. Her choirs have won numerous first place trophies and received superior ratings at state, national and international festivals. Dr. Baker earned her Bachelor of Music degree from the University of North Carolina at Greensboro; her M.A. degree from Teachers College, Columbia University, New York; and her Ph.D. degree from the University of Maryland. 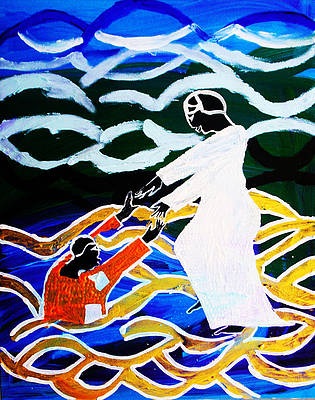 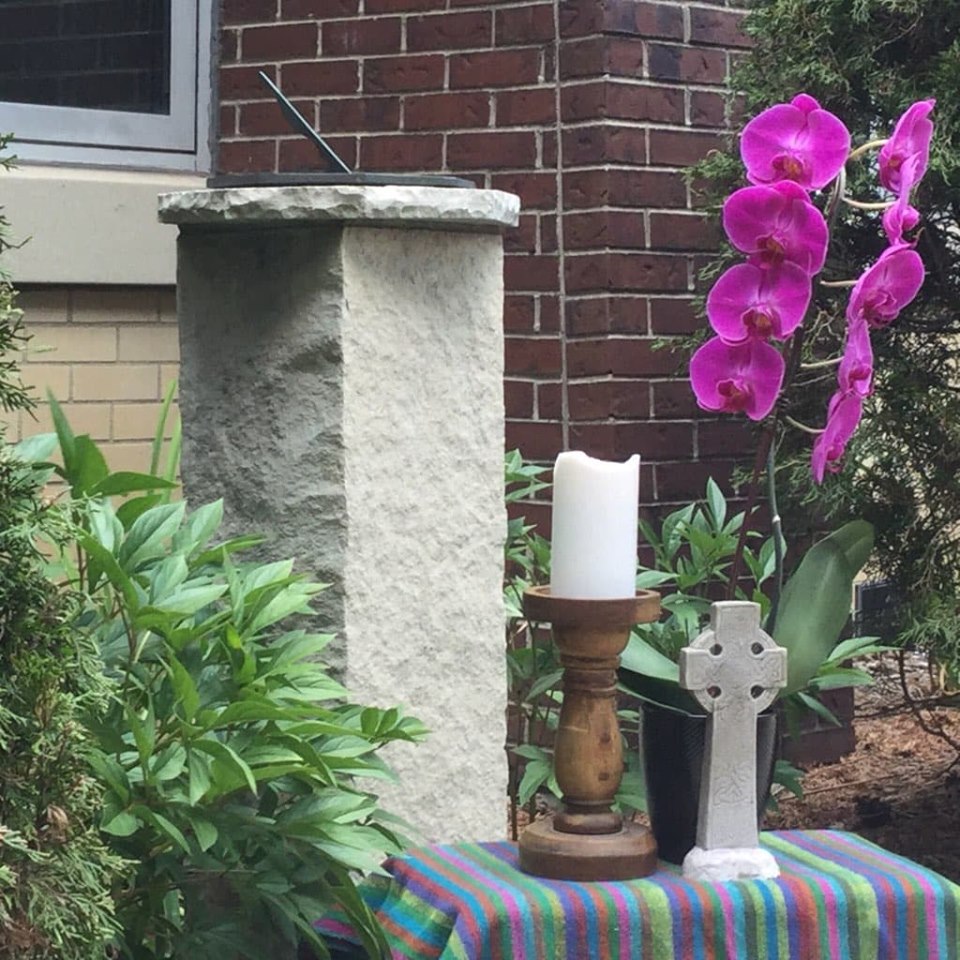