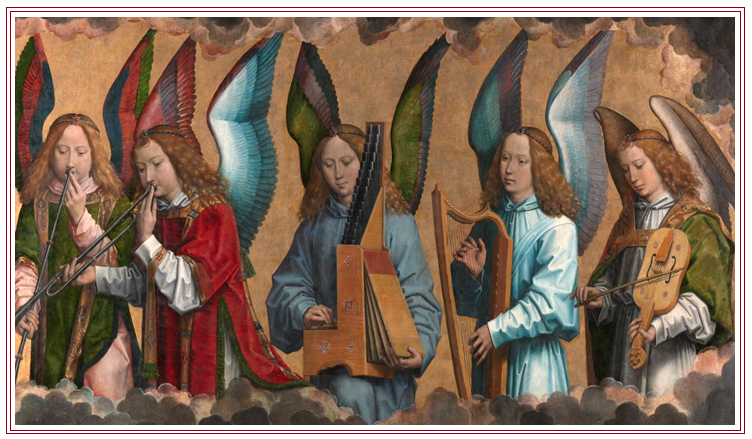 O be joyful in the Lord, all ye lands:
serve the Lord with gladness,
and come before his presence with a song.
Be ye sure that the Lord he is God;
it is he that hath made us, and not we ourselves;
we are his people, and the sheep of his pasture.
O go your way into his gates with thanksgiving,
and into his courts with praise;
be thankful unto him,
and speak good of his name.
For the Lord is gracious,
his mercy is everlasting;
and his truth endureth from generation
to generation.
(Psalm 100, Latin Vulgate)

Shout with triumph to the Lord, all the earth!
Serve the Lord with joy, come before his presence with singing.
Know that the Lord is God! (Psalm 100:1-3, Zulu)

Enter his gates with thanksgiving, his courts with praise.
Be thankful, and bless his name. (Psalm 100:4, Spanish)

6. Song of the Earth

Sing for joy, dance in gladness,
shout for joy, all the earth! Alleluia.
(Adapted from various English translations)

O God beyond all praising, we worship you today,
And sing the love amazing that songs cannot repay;
For we can only wonder at every gift you send,
At blessings without number and mercies without end:
We lift our hearts before you and wait upon your word,
We honour and adore you, our great and mighty Lord.

The flower of earthly splendour in time must surely die,
Its fragile bloom surrender to you the Lord most high;
But hidden from all nature the eternal seed is sown,
Though small in mortal stature, to heaven’s garden grown:
For Christ, the man from heaven, from death has set us free,
And we through him are given the final victory.

Then, hear, O gracious Saviour, accept the love we bring,
That we, who know your favour, may serve you as our King;
And whether our tomorrows be filled with good or ill,
We’ll triumph through our sorrows and rise to bless you still:
To marvel at your beauty and glory in your ways,
And make a joyful duty our sacrifice of praise.
(Michael Perry, ca. 1982)

This morning’s closing hymn text is reprinted under onelicense.net #A-717945. O God Beyond All Praising – words by Michael Perry, © 1992 Hope Publishing Co. All rights reserved.

The Chamber Orchestra heard in Jubilate Deo is comprised of musicians from some of Toronto’s finest orchestras, including the Canadian Opera Company Orchestra, the National Ballet Orchestra, and the Tafelmusik Baroque Orchestra. Many of the players have collaborated with the choirs of Fairlawn Avenue on numerous occasions in the past, and hope to do so again in the future, at such time as everyone is once again able to gather safely!

David Willcocks (1919-2015) was a conductor, organist, composer and arranger, and long considered Britain’s most esteemed choir director. During the course of his remarkable life, to name but a few of his many accomplishments, he was the Music Director of the King’s College Choir of Cambridge University, and was associated for many years with the Bach Choir, based in London, England. His work with both ensembles — renowned for the brightness, clarity and impeccable intonation he routinely summoned from his singers — was considered exquisitely representative of the modern English choral tradition. He was also the co-editor (along with John Rutter) of the beloved Carols for Choirs series – carol books found in virtually every church and community choir’s library. As a choral ambassador, Willcocks led ensembles in Canada, the United States and across the globe – and even worked with the Rolling Stones!

O Be Joyful in the Lord was commissioned by Music Plus Corporation for the Music Plus Church Choir Festival in Kitchener, May 30, 1999.

William Kethe (ca. 1530-1594) is thought to have been Scots-born, although this has never been confirmed. A Protestant, he fled to the continent during Queen Mary’s persecution in the 1550s. He lived in Geneva for some time, but travelled to Basel and Strasbourg to maintain contact with other English refugees. Kethe helped translate the Geneva Bible in 1560 and contributed twenty-five psalm versifications to the 1561 Anglo-Genevan Psalter. Only ten of these were retained in the 1562 English Psalter, while the 1564 Scottish Psalter kept all twenty-five. His version of Psalm 100 (The Old Hundredth) is universally known as All People That On Earth Do Dwell.

Richard Proulx (1937-2010) was an American musician who possessed of a rare combination of talents as a composer, conductor, music editor and organist. These talents, together with wide experience across denominational lines, gave him a unique perspective of both the opportunities and the challenges found in liturgical music making. His compositional output included congregational music in every form, sacred and secular choral works, song cycles, two operas, as well as instrumental and organ music. He served as a consultant for numerous hymnals, and conducted choral festivals in the USA, Canada, the Netherlands, Switzerland, Scotland, Australia, and New Zealand.

Michael Perry (1942-1996) was a Church of England clergyman, and one of the leading British hymnodists of the 20th century. He was educated at Dulwich College and went on to study at University College London; Oak Hill Theological College, London; Ridley Hall, Cambridge; and the University of Southampton. In the course of his short life, Perry wrote over 300 hymn texts – the most well known being O God Beyond All Praising, set to the tune “Thaxted” (a hymn tune by the English composer Gustav Holst, based on the stately theme from the middle section of the Jupiter movement of his orchestral suite The Planets, and named after Thaxted, the English village where Holst lived much of his life.) Perry was increasingly disabled by an inoperable brain tumour that was diagnosed in early 1996, and tragically died at the age of 54 in December of 1996.

Christ with Singing and Music-Making Angels by Hans Memling https://fineartamerica.com/featured/christ-with-singing-and-music-making-angels-panel-2-hans-memling.html