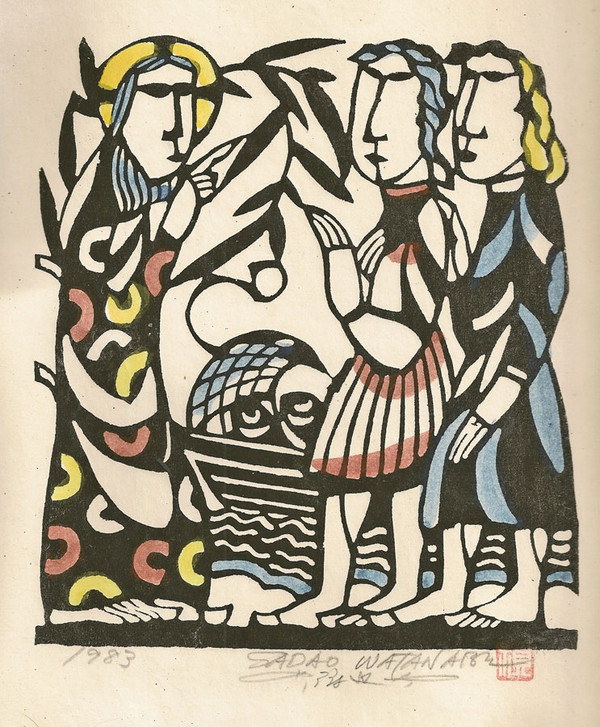 Dear Lord and Father of mankind,
Forgive our foolish ways;
Re-clothe us in our rightful mind;
In purer lives thy service find,
In deeper reverence, praise.

In simple trust like theirs who heard,
Beside the Syrian sea,
The gracious calling of the Lord,
Let us, like them, without a word
Rise up, and follow thee.

O Sabbath rest by Galilee!
O calm of hills above,
Where Jesus knelt to share with thee
The silence of eternity,
Interpreted by love!

Drop thy still dews of quietness,
Till all our strivings cease;
Take from our souls the strain and stress,
And let our ordered lives confess
The beauty of thy peace.

Breathe through the heats of our desire
Thy coolness and thy balm;
Let sense be dumb, let flesh retire:
Speak through the earthquake, wind, and fire,
O still small voice of calm!
(John Greenleaf Whittier, 1807-1892)

I, the Lord of sea and sky, I have heard my people cry.
All who dwell in darkest sin my hand will save.
I who made the stars of night, I will make their darkness bright.
Who will bear my light to them? Whom shall I send?

Here I am, Lord. Is it I, Lord?
I have heard you calling in the night.
I will go, Lord, if you lead me.
I will hold your people in my heart.

I, the Lord of snow and rain, I have borne my people’s pain,
I have wept for love of them; they turn away.
I will break their hearts of stone, give them hearts for love alone.
I will speak my word to them. Whom shall I send?

Here I am, Lord. Is it I, Lord?
I have heard you calling in the night.
I will go, Lord, if you lead me.
I will hold your people in my heart.

I, the Lord of wind and flame; I will tend the poor and lame,
I will set a feast for them; my hand will save.
Finest bread I will provide till their hearts be satisfied.
I will give my life to them. Whom shall I send?

The fire is dying now, my lamp is growing dim
The shades of night are lifting
The morning light steals across my window pane
Where webs of snow are drifting

Jesus calls us; o’er the tumult
Of our life’s wild restless sea.
Day by day his sweet voice soundeth,
Saying, “Christian, follow me.”

As of old Saint Andrew heard it
By the Galilean lake,
Turned from home and toil and kindred,
Leaving all for his dear sake.

Jesus calls us from the worship
Of the vain world’s golden store,
From each idol that would keep us,
Saying, “Christian, love me more.”

In our joys and in our sorrows,
Days of toil and hours of ease,
Still he calls, in cares and pleasures,
“Christian, love me more than these.”

Jesus calls us: by thy mercies,
Saviour, make us hear thy call,
Give our hearts to thine obedience,
Serve and love thee best of all.
(Cecil Frances Alexander, 1823-1895)

Sing joyfully unto God our strength.
Sing loud unto the God of Jacob.
Take the song and bring forth the timbrel,
The pleasant harp and the viol.
Blow the trumpet in the new moon,
Even in the time appointed and at our feast day.
For this is a statute for Israel,
And a law of the God of Jacob.
(from Psalm 81)

Closing Hymn Now That the Daylight Fills the Sky

Now that the daylight fills the sky,
We lift our hearts to God on high,
That He, in all we do or say,
Would keep us free from harm today:

Would guard our hearts and tongues from strife,
From anger’s din would hide our life,
From all ill sights would turn our eyes,
Would close our ears from vanities:

Would keep our inmost conscience pure,
Our souls from folly would secure,
Would bid us check the pride of sense
With due and holy abstinence.

So we, when this new day is gone
And night in turn is drawing on,
With conscience by the world unstained,
Shall praise His Name for victory gained.

John Greenleaf Whittier (1807-1892) was an American poet and editor who, in the latter part of his life, shared with the great poet Henry Wadsworth Longfellow the distinction of being a household name in both England and the United States. A Quaker devoted to social causes and reform, Whittier worked passionately for a number of abolitionist newspapers and magazines. He founded the antislavery Liberal party in 1840, and ran for Congress in 1842. While his critics never considered him to be a great poet, they thought him a noble and kind man whose verse gave unique expression to ideas they valued. From 1865 until his death, Whittier wrote of religion, nature, and rural life.

Daniel L. Schutte (b. 1947) is an American composer of Catholic liturgical music, and a contemporary Christian songwriter best known for the hymn I, the Lord of Sea and Sky, (also known as Here I Am, Lord). He has composed over 150 popular hymns and Mass settings in total, and also holds two master of arts degrees – one in theology and one in liturgy from The Jesuit School of Theology at Berkeley. Also an alumnus of both St. Louis University and Seattle University, Schutte has received three honorary doctoral degrees for his contribution to the life of the church.

Gordon Lightfoot (b.1938) is a Canadian singer-songwriter and guitarist who achieved international success in folk, folk-rock, and country music. He is credited with helping to define the folk-pop sound of the 1960s and 1970s. Born and raised in Orillia, Ontario, Lightfoot is often referred to as Canada’s greatest songwriter, and is known internationally as a folk-rock legend. He was inducted into Canada’s Walk of Fame in 1998, and in May 2003 he was made a Companion of the Order of Canada, the country’s highest civilian honour.

Cecil Frances Alexander (1818-1895) was an Anglo-Irish hymnodist and poet. “All Things Bright and Beautiful”, “There Is a Green Hill Far Away”, and the Christmas carol “Once in Royal David’s City” are three of her most well known hymn texts.

William Byrd (ca. 1540/42-1623) was an English composer, keyboard player and teacher. Widely considered to be one of the greatest composers of the Renaissance, and one of the greatest of all British composers, he had a huge influence on composers both from his native England and those on the continent. He wrote in many of the forms current in England at the time, including various types of sacred and secular polyphony, keyboard, and consort music. Although he produced sacred music for Anglican services, sometime during the 1570s he became a Roman Catholic and wrote Catholic sacred music later in his life. Byrd’s exceptionally long lifespan meant that he lived into an age in which many of the forms of vocal and instrumental music which he had made his own were beginning to lose their appeal to most musicians. The native tradition of Latin music which Byrd had done so much to keep alive more or less died with him, while consort music (instrumental ensembles) underwent a huge change of character at the hands of a brilliant new generation of musicians.