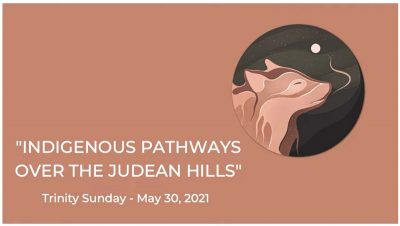 (Holy, Holy, Holy, Lord God of hosts.
Heaven and earth are full of thy glory, O Lord.
Hosanna in the highest. Holy.)

Hymn Maker, in Whom We Live

Maker, in whom we live, in whom we are and move,
The glory, power, and praise receive for thy creating love.
Let all the angel throng give thanks to God on high,
While earth repeats the joyful song and echoes to the sky.

Incarnate Deity, let all the ransomed race
Render in thanks their lives to thee for thy redeeming grace.
The grace to sinners shown, in every heart proclaim,
And cry, “Salvation to our God, salvation to the Lamb!”

Spirit of Holiness, let all thy saints adore
Thy sacred energy, and bless thy heart-renewing power.
Not angel tongues can tell thy love’s ecstatic height,
The glorious joy unspeakable, the beatific sight.

Eternal, Triune God, let all the hosts above,
Let all on earth below record and dwell upon thy love.
When heaven and earth have fled before thy glorious face,
Sing all the saints thy love has made thy everlasting praise.
(Charles Wesley, 1747)

We believe in God Supreme, ever present, never seen;
God most high, who reigns above; Father nigh, whose name is Love.
We whose prayers to God ascend, praise creation’s Source and End.

We rejoice in Jesus Christ, God’s own Son, our Sacrifice;
Very God, yet virgin born; sinless, yet for sinners torn.
We whom Jesus died to win know He lives to come again.

We adore the Spirit free – author of our unity.
Giver of the sacred Word, wellspring of the second birth.
We whom He indwells and fills, yield our hearts and minds and wills.

We, the Church, affirm our faith in the Triune God of grace;
Kingdoms fall and ages change; faithful, changeless, God remains!
One in Christ, we lift our voice! We believe, and we rejoice!
(Chris Anderson)

Closing Hymn Thou Whose Almighty Word

Please note: this piece is rather long (approx. 7.5 minutes), but it is sublime, and worth taking the time to listen and watch!

This morning’s anthem text is reprinted under onelicense.net #A-717945. We Believe – words by Chris Anderson, © 2015 Beckenhorst Press. All rights reserved.

Gabriel Fauré (1845-1924) was a French composer, organist, pianist, and teacher. Born into a cultured but not especially musical family, his talent became clear when he was a small boy. At the age of nine, he was sent to the École Niedermeyer music college in Paris, where he was trained to be a church organist and choirmaster. Among his teachers was Camille Saint-Saëns, who became a lifelong friend. By his last years, Fauré was recognized in France as the leading French composer of his day, and his musical style influenced many 20th-century composers. His Requiem is firmly entrenched in the core choral repertoire, and is sung the world over.

Jeremy Bankson (b. 1975) is Director of Music at Prince of Peace Lutheran Church in Dublin, Ohio, where he leads a dynamic and developing music ministry that includes several choirs. Prior to this position, Jeremy was the Associate Minister of Music and Executive Director of the Abendmusik concert series at First-Plymouth Church in Lincoln, Nebraska.

Reginald Heber (1783-1826) was an English Bishop, man of letters and hymn writer. The son of a rich landowner and cleric, Heber gained fame at the University of Oxford as a poet. After graduation, he embarked on an extended tour of Scandinavia, Russia and Central Europe, and was then ordained in 1807. After 16 years as a country parson, he served as Bishop of Calcutta until his death at the young age of 42. Heber’s hymn “Holy, Holy, Holy, Lord God Almighty” was considered by Alfred, Lord Tennyson to be one of the finest hymns ever written, and remains popular to this day, especially for Trinity Sunday.

Anne Bornath (b. 1968) has been a soprano section lead at Fairlawn since 2016, and a member of the acclaimed Elmer Iseler Singers since 2009. A graduate of the University of Toronto, and an aerospace engineer by day, she grew up in a musical family, playing multiple instruments, and singing with her siblings. Be Still is Anne’s second choral composition, and we are delighted to feature it as our virtual musical offering in this morning’s worship service. The singers heard on the recording are Anne, daughter Aerin, sister Trudi, brother Peter, and cousin Suzanne. Definitely a family affair!

James Marriott (1780-1825) was an English Anglican clergyman and poet. Although he wrote several hymns, the only one that survives is “Thou Whose Almighty Word”. It is thought to have been written in 1813 and was published posthumously in The Friendly Visitor in 1825 with the title “Missionary Hymn”.

Peter Ilyich Tchaikovsky (1840-1893) is one of the most popular Russian composers of all time. His music has always had great appeal for the general public in virtue of its tuneful, open-hearted melodies, impressive harmonies, and colourful, picturesque orchestration, all of which evoke a profound emotional response. His oeuvre includes 7 symphonies, 11 operas, 3 ballets, 5 suites, 3 piano concertos, a violin concerto, 11 overtures (strictly speaking, 3 overtures and 8 single movement programmatic orchestral works), 4 cantatas, 20 choral works, 3 string quartets, a string sextet, and more than 100 songs and piano pieces.

St. John Chrysostom (ca. 347-407) was an important early Church Father who served as archbishop of Constantinople (now called Istanbul). Born at Antioch in Syria, John was the son of a high-ranking military officer, and was raised as a Christian by his widowed mother. As a young man, he studied with eminent teachers of law, rhetoric, philosophy, and theology. One of the most prolific authors of the early Christian Church, he was also a renowned orator, and earned the epithet Chrysostom, which means “golden-mouthed” in Greek. Chrysostom’s preaching, by word and example, exemplified the role of the prophet to comfort the afflicted and to afflict the comfortable. For his honesty and courage, he paid the price of a turbulent ministry, enduring personal vilification and exile.