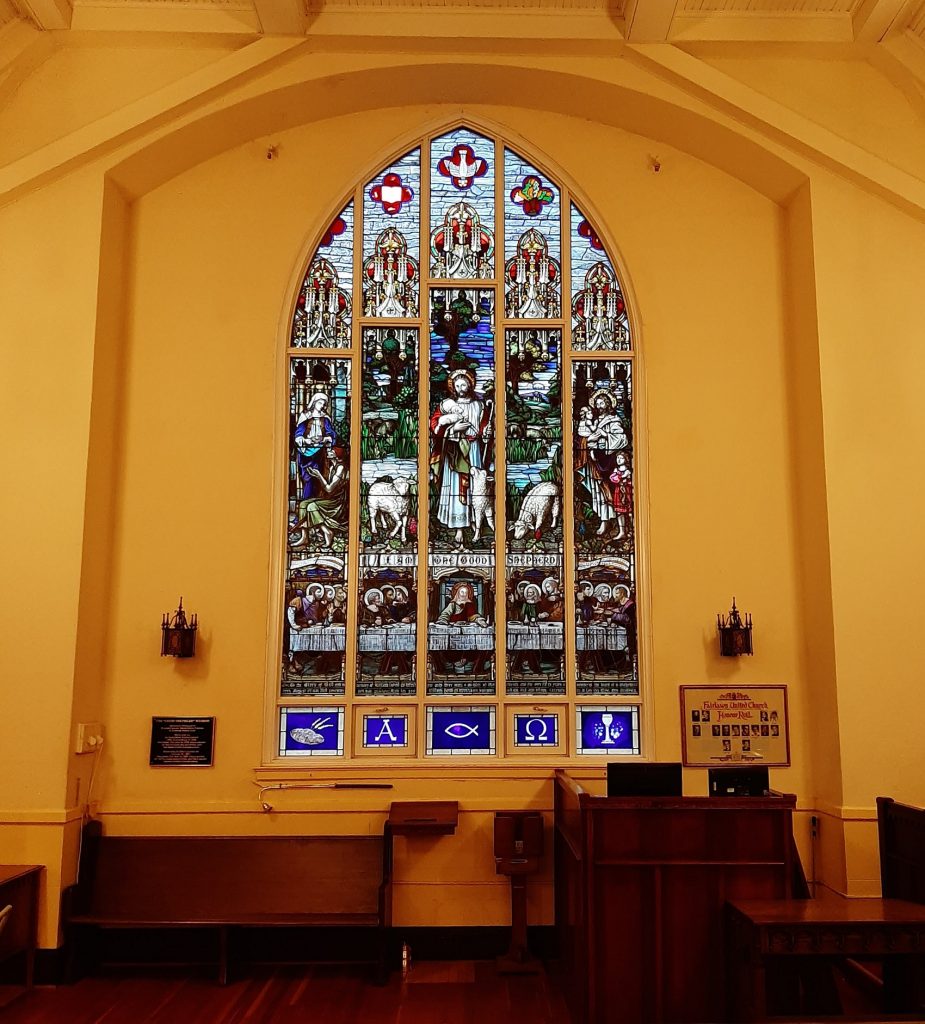 Opening Hymn The Church’s One Foundation

The church’s one foundation
Is Jesus Christ her Lord;
She is his new creation
By water and the word:
From heaven he came and sought her
To be his holy bride;
With his own blood he bought her,
And for her life he died.

Elect from every nation,
Yet one o’er all the earth,
Her charter of salvation
One Lord, one faith, one birth,
One holy name she blesses,
Partakes one holy food,
And to one hope she presses
With every grace endued.

Yet she on earth hath union
With God the Three in One,
And mystic sweet communion
With those whose rest is won.
O happy ones and holy!
Lord, give us grace that we,
Like them, the meek and lowly,
On high may dwell with thee.
(Samuel John Stone, 1830-1900)

So, look to the future, and praise the future,
God gives a future, God gives us hope.
(Pepper Choplin, based on Jeremiah 29:11-14)

Hymn When I Survey the Wondrous Cross

When I survey the wondrous cross
On which the Prince of glory died.
My richest gain I count but loss,
And pour contempt on all my pride.

Forbid it, Lord, that I should boast
Save in the death of Christ, my God:
All the vain things that charm me most,
I sacrifice them to his blood.

See from his head, his hands, his feet,
Sorrow and love flow mingled down!
Did e’er such love and sorrow meet,
Or thorns compose so rich a crown?

His dying crimson, like a robe,
Spreads o’er his body on the tree;
Then I am dead to all the globe,
And all the globe is dead to me.

Were the whole realm of nature mine,
That were a present far too small:
Love so amazing, so divine,
Demands my soul, my life, my all.
(Isaac Watts, 1674-1748)

Closing Hymn The Servant Song (We Are Pilgrims)

Samuel John Stone (1839-1900) was an English poet, hymnodist, and a priest in the Church of England. He published several poetic volumes, and was the author of many original hymns and translations, which are hopeful in spirit and skillfully constructed. He is now chiefly remembered for his hymn text The Church’s One Foundation.

Claude Debussy (1862-1918) was a French composer, sometimes called the first Impressionist composer, although he vigorously rejected the term. Born of a modest means and little cultural exposure, he showed enough musical talent to be admitted at the age of ten to France’s leading music college – the Conservatoire de Paris. He originally studied the piano, but found his vocation in innovative composition, despite the disapproval of the Conservatoire’s conservative professors. He took many years to develop his mature style, and was nearly 40 when he achieved international fame in 1902 with the only opera he completed, Pelléaset Mélisande. With early influences including Russian and Far Eastern music, Debussy developed his own style of harmony and orchestral colouring, derided – and unsuccessfully resisted – by much of the musical establishment of the day. His works strongly influenced a wide range of composers, including the French organist and composer, Olivier Messiaen. Debussy died of cancer at his home in Paris at the age of 55, after a composing career of a little more than 30 years.

Carlos Salzedo (1885-1961) was a French harpist, pianist, composer, and conductor. He started studying at the Conservatoire de Paris at age nine, and began his solo recital career at age eighteen. He moved to the United States in 1909 to play harp at the Metropolitan Opera under the baton of Arturo Toscanini. A man of prodigious talent, he went on to radically change the image of the harp, and its capabilities. His compositions and arrangements for the instrument have become standards of the repertoire. Also a renowned teacher, he started the harp department at the Curtis Institute of Music in 1924 and taught at the Julliard School of Music until 1937. His many students went on to principal positions in leading orchestras, and to teach at universities, colleges and conservatories.

Isaac Watts (1674-1748) was an English minister, hymn writer, theologian, and logician. He was a prolific and popular hymn writer and is credited with some 750 hymns. He is recognized as the “Godfather of English Hymnody”; many of his hymns remain in use today and have been translated into numerous languages.