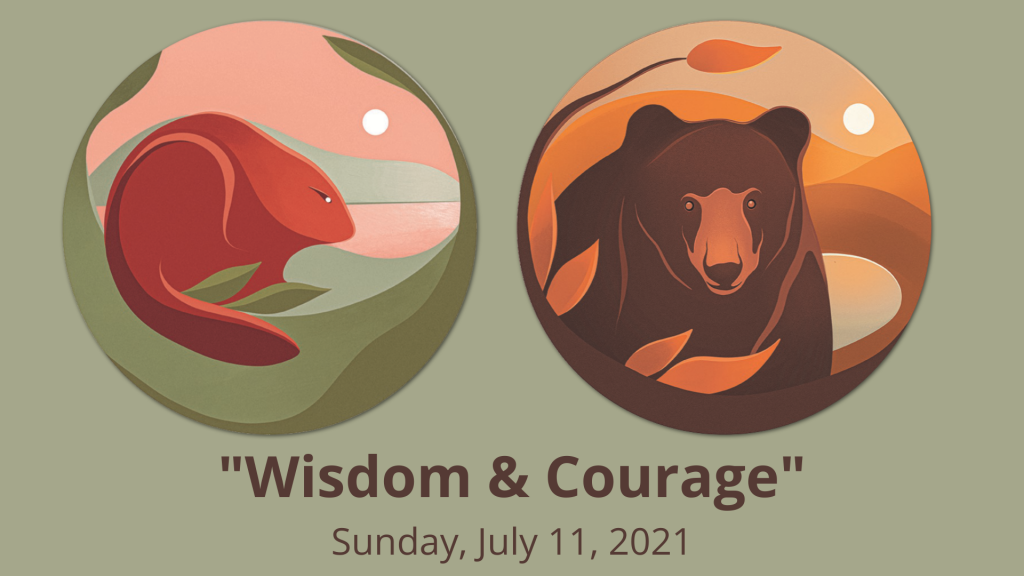 Opening Hymn God of Grace and God of Glory

God of grace and God of glory,
on thy people pour thy power;
crown thine ancient church’s story;
bring its bud to glorious flower.
Grant us wisdom, grant us courage,
for the facing of this hour.

Lo! the hosts of evil round us,
scorn thy Christ, assail his ways!
From the fears that long have bound us,
free our hearts to faith and praise.
Grant us wisdom, grant us courage,
for the living of these days.

Cure thy children’s warring madness,
bend our pride to thy control;
shame our wanton selfish gladness,
rich in things and poor in soul.
Grant us wisdom, grant us courage,
lest we miss thy kingdom’s goal.

Save us from weak resignation
to the evils we deplore;
let the gift of thy salvation
be our glory evermore.
Grant us wisdom, grant us courage,
serving thee whom we adore.
(Harry Emerson Fosdick, 1930, alt.)

A mighty fortress is our God,
A bulwark never failing;
Our helper he amidst the flood
Of mortal ills prevailing:
For still our ancient foe
Doth seek to work us woe;
His craft and power are great,
And, armed with cruel hate,
On earth is not his equal.

Did we in our own strength confide,
Our striving would be losing;
Were not the right man on our side,
The man of God’s own choosing:
Dost ask who that may be?
Christ Jesus, it is he;
Lord Sabaoth his name,
From age to age the same,
And he must win the battle.

That word above all earthly powers,
No thanks to them, abideth;
The Spirit and the gifts are ours
Through him who with us sideth:
Let goods and kindred go,
This mortal life also;
The body they may kill:
God’s truth abideth still,
His kingdom is forever.
(Martin Luther, ca. 1528,
Trans. Frederick H. Hedge, 1853)

Harry Emerson Fosdick (1878-1969) was an American Protestant minister, teacher and author. From 1926-1946, he was both the minister of the interdenominational Riverside Church in New York City, and a preacher on the National Vespers nationwide radio programme. Fosdick was also a central figure in the Protestant liberal-fundamentalist controversies during the 1920s, an early practitioner of pastoral counseling, and prolific author of sermons, articles, and books.

Martin Luther (1483-1546) is one of Western history’s most significant figures. Born in Eisleben, Saxony (now Germany) which was then part of the Holy Roman Empire, he spent his early years in relative anonymity as a monk and scholar. But in 1517 Luther penned a document attacking the Catholic Church’s practice of selling “indulgences” to absolve sin. His “95 Theses,” which propounded two central beliefs—that the Bible is the central religious authority, and that humans may reach salvation only by their faith and not by their deeds—sparked the Protestant Reformation. Although these ideas had been advanced before, Luther codified them at a moment in history ripe for religious reformation. The Catholic Church was ever after divided, and the Protestantism that soon emerged was shaped by Luther’s ideas. His writings changed the course of religious and cultural history in the West.

Frederick H. Hedge (1805-1890) was an American author, scholar, and Unitarian minister. Born in Cambridge, Massachusetts, his father was a Harvard logic professor who ensured that his precocious son received a good education, including four years in Germany and a distinguished academic career at Harvard University and Harvard Divinity School. Hedge served as pastor at several locations in New England, and maintained a prolific output of scholarly papers and anthologies; he specialized in German language studies, but was equally adept in theology and metaphysics, as well as other topics. Along with his close friend, Ralph Waldo Emerson, Hedge was instrumental in developing Transcendentalism, although he later distanced himself from the group’s more extreme positions. He also taught at Harvard, and is remembered for helping to popularize German literature and thought in English.

Georg Philipp Telemann (1681-1767) was a German Baroque composer and multi-instrumentalist. Almost completely self-taught in music, he entered the University of Leipzig to study law, but eventually settled on a career in music, against his family’s wishes. He held important positions in a number of German cities before settling in Hamburg in 1721, where he became musical director of that city’s five main churches. One of the most prolific composers in history (at least in terms of surviving works), Telemann was considered by his contemporaries to be one of the leading German composers of the time, and was compared favourably both to his friend Johann Sebastian Bach, and to George Frideric Handel, whom he also knew personally. His music incorporates French, Italian, and German national styles, and he was at times even influenced by Polish popular music. Telemann’s enormous output, among the largest of any classical composer in history, includes parts of at least 31 cantata cycles, many operas, concertos, oratorios, songs, music for civic occasions and church services, passions, orchestral suites and abundant amounts of chamber music – his music stands as an important link between the late Baroque and early Classical styles.