The Table is Big Enough, Even for This 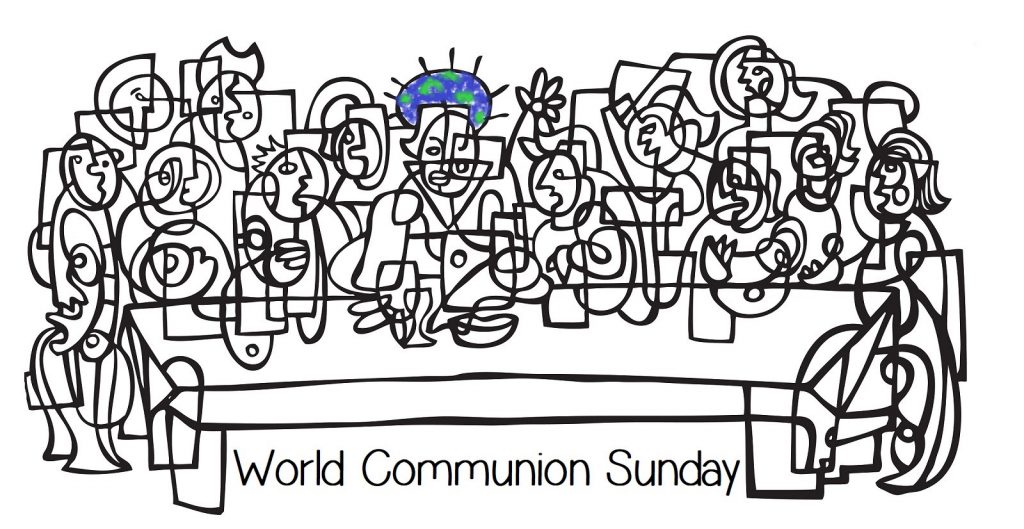 O praise ye the Lord! Sing praise in the height;
Rejoice in his word, ye angels of light;
Ye heavens, adore him by whom ye were made,
And worship before him in brightness arrayed.

O praise ye the Lord, all things that give sound;
Each jubilant chord re-echo around;
Loud organs, his glory forth tell in deep tone,
And sweet harp, the story of what he hath done.

Here, O my Lord, I see Thee face to face,
Here would I touch and handle things unseen,
Here grasp with firmer hand the eternal grace,
And all my weariness upon Thee lean.

Here would I feed upon the bread of God,
Here drink with Thee the royal wine of heaven,
Here would I lay aside each earthly load,
And taste afresh the calm of sin forgiven.

This is the hour of banquet and of song,
This is the heavenly table spread for me,
Here let me feast, and feasting still prolong
The brief, bright hour of fellowship with Thee. Amen.
(Horatius Bonar, 1855)

Let us talents and tongues employ,
Reaching out with a shout of joy;
Bread is broken, the wine is poured,
Christ is spoken and seen and heard.

Christ is able to make us one,
At the table he sets the tone,
Teaching people to live to bless,
Love in word and in deed express.

Jesus calls us in, sends us out,
Bearing fruit in a world of doubt,
Gives us love to tell, bread to share:
God (Immanuel) everywhere!

This sanctuary of my soul,
Unwitting I keep white and whole,
Unlatched and lit,
If Thou shouldst care to enter,
Or to tarry there.

With parted lips and outstretched hands,
And listening ears Thy servant stands.
Call Thou early, call Thou late,
To Thy great service dedicate.
My soul keep white and whole.
(Charles Hamilton Sorley, 1895-1915)

In the desert, in the wilderness of life,
I am searching for the One who searches me.
As I wander, hungry, thirsty, lost, alone,
I hear God’s call; I hear the whisper of my name.

At the table, He prepares for me a place.
He redeems me, I am pardoned by His grace.
He restores me with His rich and lavish love.
In His call, I hear the whisper of my name.

In His call, I hear the whisper of my name.
(Susan Bentall Boersma)

Closing Hymn I, the Lord of Sea and Sky (Here I Am, Lord)

I, the Lord of sea and sky,
I have heard my people cry.
All who dwell in dark or sin
My hand will save.
I, who made the stars of night,
I will make their darkness bright.
Who will bear my light to them?
Whom shall I send?

Here I am Lord. Is it I, Lord?
I have heard you calling in the night.
I will go, Lord, if you lead me.
I will hold your people in my heart.

I, the Lord of wind and flame,
I will tend the poor and lame,
I will set a feast for them;
My hand will save.
Finest bread I will provide
Till their hearts be satisfied.
I will give my life to them.
Whom shall I send?

Postlude Gabriel’s Oboe (from The Mission)/How Great Thou Art

This morning’s hymns and anthem are reprinted under onelicense.net #A-717945. Let Us Talents and Tongues Employ – words by Fred Kaan, © 1975 Hope Publishing Company. The Whisper – words by Susan Bentall Boersma, © 2012 Beckenhorst Press, Inc. I, the Lord of Sea and Sky – words by Daniel L. Schutte, © 1981 OCP. All rights reserved.

Francis Poulenc (1899-1963) was a French composer and pianist. Born into a wealthy family of pharmaceutical manufacturers, his mother, an amateur pianist, taught him to play, and music formed a part of his family life. His compositions include songs, solo piano works, chamber music, choral pieces, operas, ballets, orchestral concert music and incidental music for plays and films. He was also an inspired composer of religious music – his Gloria, Stabat Mater and motets for various seasons of the church year being among the most notable. The leading composer of “Les Six” – a group of French composers devoted to turning music away from Impressionism, formality and intellectualism – he wrote in a direct and tuneful manner, often juxtaposing the witty and ironic with the sentimental and melancholic. Among his major works is a series of pieces for wind instruments and piano. He was particularly fond of woodwinds, and planned a set of sonatas for all of them, yet only lived to complete four: sonatas for flute, oboe, clarinet, and the Elegie for horn.

Mack Wilberg (b. 1955) has been the music director of the Mormon Tabernacle Choir since 2008. He is a former Professor of Music at Brigham Young University and is active as a composer, arranger, guest conductor and clinician throughout the United States and abroad. His compositions and arrangements are performed and recorded by choral organizations around the world. In addition to the many compositions he has written and arranged for the Mormon Tabernacle Choir, his works have also been performed by such artists as Renée Fleming, Frederica von Stade, Bryn Terfel, and the King’s Singers. Dr. Wilberg received his Bachelor of Music degree from Brigham Young University and his Master and Doctoral degrees from the University of Southern California.

Henry Williams Baker (1821-1877) was an English hymn writer. He was born in London, and educated at Trinity College, Cambridge, where he graduated with a B.A. 1844, and M.A. in 1847. From 1851 until his death in 1877 he was Vicar of Monkland, Herefordshire, during which time he rendered the Church great service by editing “Hymns Ancient and Modern,” one of the most popular of modern hymn-books, to which he contributed a number of original hymns, metrical litanies, and translations. The text of this morning’s opening hymn is a paraphrase of Psalm 150.

Here, O My Lord was written for the Fairlawn Senior Choir, and first performed on Sunday, October 14, 1990.

Horatius Bonar (1808-1899) was a Scottish churchman, author, and poet, but is now principally remembered as a prodigious hymnodist. Many of his hymn texts (which number over 140) are known throughout the English-speaking world. Two of his most well known are Here, O My Lord, I See Thee Face to Face and I Heard the Voice of Jesus Say.

Doreen Potter (1925-1980) was born in Panama, but lived in Jamaica during her childhood. She then moved to England where she trained as a teacher of music at St. Katharine’s College in Liverpool. In 1957 she obtained a Licentiate of Music degree at Trinity College, London, where she played violin in several orchestras. She married Philip Potter, who served as general secretary of the World Council of Churches in Geneva, and through that connection she met Fred Kaan and began writing tunes for his texts. In 1975 they published a collection of hymns which included Let Us Talents and Tongues Employ to her tune “Linstead”. This hymn is now widely sung all over the world and appears in hymnals of many denominations. Tragically, Potter died of cancer at the age of 55, before many of her musical settings achieved popularity.

Robert A. Hobby (b. 1962) was drawn to music at a very early age. The son of a Lutheran pastor, he grew up in a church music environment, and began playing the organ for services at age ten at his father’s church in Columbia City, Indiana. He holds a Bachelor of Music degree in church music from Wittenberg University in Springfield, Ohio, and a Master of Music degree in organ performance from the University of Notre Dame in South Bend, Indiana, and has over 150 compositions in print from numerous publishers. He is currently the Director of Music at Trinity English Lutheran Church in Ft. Wayne, Indiana.

Reverend Fred Kann (1929-2009) was the foremost of a new generation of post-second world war hymn writers expressing the dreams of an emerging new humanity. Kaan was born in Haarlem in the Netherlands, and his teenage experience of Nazi occupation never left him. His father was a member of the Dutch Resistance; his family hid a Jew and a political prisoner in their home; and three of his grandparents starved to death during this time. “Emerging from the war a committed pacifist, I became interested in the faith and began the study of theology and psychology at Utrecht University”, he is quoted as saying. The Jamaican folk melody for this morning’s second hymn was adapted by Doreen Potter, who upon first hearing it, envisioned the possibility of using it as a hymn tune. Kaan wrote the text Let Us Talents and Tongues Employ in 1975, and the combination of words and melody was first sung together at the 1975 World Council of Churches Assembly in Nairobi, Africa.

This Sanctuary of My Soul was composed for the Covenanting service of Rev. Charles Miller, which took place at Fairlawn on Sunday, October 1, 1989.

Daniel L. Schutte (b. 1947) is an American composer of Catholic liturgical music, and a contemporary Christian songwriter best known for the hymn I, the Lord of Sea and Sky, (also known as Here I Am, Lord). He has composed over 150 popular hymns and Mass settings in total, and also holds two master of arts degrees – one in theology and one in liturgy, from The Jesuit School of Theology at Berkeley. Also an alumnus of both St. Louis University and Seattle University, Schutte has received three honorary doctoral degrees for his contribution to the life of the church.