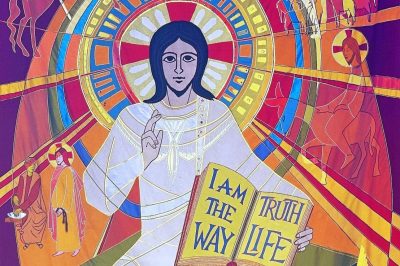 O clap your hands together, all ye people:
O sing unto God with the voice of melody.
For the Lord is high, and to be feared:
He is the great King upon all the earth.
He shall subdue the people under us:
And the nations under our feet.
He shall choose out a heritage for us:
Even the worship of Jacob, whom he loved.
God is gone up with a merry noise:
And the Lord with the sound of the trump.
O sing praises, sing praises unto our God:
O sing praises, sing praises unto our King.
For God is the King of all the earth:
Sing ye praises with understanding.
(Psalm 47:1-7)

Opening Hymn Hail the Day That Sees Him Rise

Hail the day that sees Him rise, Alleluia!
Ravished from our wistful eyes, Alleluia!
Christ, awhile to mortals given, Alleluia!
Reascends His native heaven. Alleluia!

See, He lifts His hands above! Alleluia!
See, He shows the prints of love! Alleluia!
Hark! His gracious lips bestow, Alleluia!
Blessings on His church below. Alleluia!

There we shall with Thee remain, Alleluia!
Partners of Thy endless reign; Alleluia!
There Thy face I’ll ever see, Alleluia!
Find our heaven of heavens in Thee! Alleluia!
(Charles Wesley, 1707-1788)

Ye servants of God, your Master proclaim,
And publish abroad His wonderful name;
The name all victorious of Jesus extol;
His kingdom is glorious, and rules over all.
Worthy the Lamb.

“Salvation to God, who sits on the throne!”
Let all cry aloud, and honour the Son:
The praises of Jesus the angels proclaim,
Fall down on their faces, and worship the Lamb.
Worthy the Lamb.

God rules in the height, almighty to save,
Though hid from our sight, His presence we have;
The great congregation His triumph shall sing,
Ascribing salvation to Jesus our King.
Worthy the Lamb.

Then let us adore and give Him His right,
All glory and pow’r, all wisdom and might,
All honour and blessing, with angels above,
And thanks never ceasing, and infinite love.
Worthy the Lamb!
(Charles Wesley, 1744)

Hymn The Head That Once was Crowned with Thorns

The highest place that heaven affords
Is His, by sovereign right,
The King of kings, and Lord of lords,
He reigns in perfect light.

To them the Cross, with all its shame,
With all its grace is given;
Their name, an everlasting name;
Their joy the joy of heaven.

They suffer with their Lord below,
They reign with Him above,
Their profit and their joy to know
The mystery of His love.

The cross He bore is life and health,
Though shame and death to Him:
His people’s hope, His people’s wealth,
Their everlasting theme.
(Thomas Kelly, 1769-1854)

See Him coming with the clouds.
Ev’ry eye shall see Him whom they have pierced.
See Him who is the first and is the last, Alpha and Omega.
He is the Living One. He who is and was and who is to come.
He has loved us unto death. He has freed us by His blood.
He is the mighty Son of God. Crown Him, behold your King.
Behold Him! Behold the Lord of lords, and King of kings.
Crown Him!
(Based on texts from Isaiah, John, Hebrews and Revelation)

Charles Wesley (1707-1788) was an English leader of the Methodist movement, most widely known for writing about 6,500 hymn texts. He was educated at Westminster School and Christ Church, Oxford, and after graduating with a master’s degree in classical languages and literature, Charles followed his father and brother into Anglican orders in 1735. He was a younger brother of Methodist founder John Wesley, and Anglican cleric Samuel Wesley the Younger, and also the father of musician Samuel Wesley, and the grandfather of musician Samuel Sebastian Wesley.

Thomas Kelly (1769-1854) initially studied for the Bar at Trinity College, Dublin, but he abandoned the study of law, in favour of preaching the Gospel, and became a clergyman of the Church of Ireland in 1792. He was also a poet, musician, and linguist. His hymns can be found in all of the principal hymn books of Great Britain, Canada, and the USA. 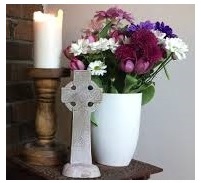