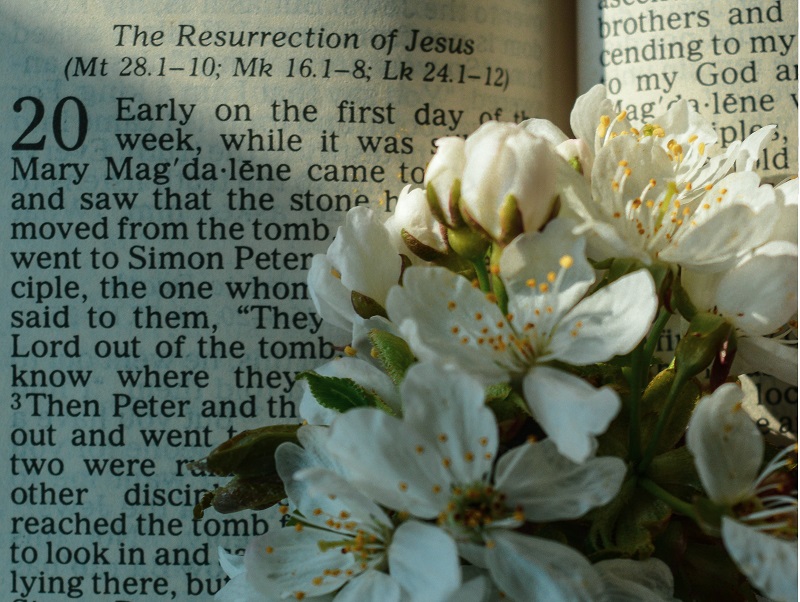 Rise up in early morning;
Sing of the risen Saviour.
Sing tidings of salvation with alleluias ringing,
In cymbalis, in cymbalis bene sonantibus.

Go forth ye saints, to meet him;
Light up your lamps of gladness.
Sing tidings of salvation with alleluias ringing,
In cymbalis, in cymbalis bene sonantibus.
(text: R. P., after John Damascene, ca. 754)

Hymn The Strife is O’er

This joyful Eastertide, away with sin and sorrow:
My Love, the Crucified, hath sprung to life this morrow.

Had Christ, that once was slain, ne’er burst his three-day prison,
Our faith had been in vain: but now hath Christ arisen.

My flesh in hope shall rest, and for a season slumber:
Till trump from east to west shall wake the dead in number.

Had Christ, that once was slain, ne’er burst his three-day prison,
Our faith had been in vain: but now hath Christ arisen.

Death’s flood hath lost its chill, since Jesus crossed the river:
Lover of souls, from ill my passing soul deliver.

Had Christ, that once was slain, ne’er burst his three-day prison,
Our faith had been in vain: but now hath Christ arisen.
(George Ratcliffe Woodward, 1894, alt.)

Closing Hymn Thine Be the Glory

Worthy is the Lamb that was slain,
And hath redeemèd us to God by His blood,
To receive power, and riches, and wisdom,
And strength, and honour, and glory, and blessing.
Blessing and honour, glory and pow’r be unto Him
That sitteth upon the throne, and unto the Lamb,
For ever and ever. (Revelation 5:12, 13b)
Amen.

Mark Patterson (b. 1969) is a nationally acclaimed American composer, conductor, clinician and teacher, who currently serves as the Director of Music at Salisbury Presbyterian Church in Midlothian, Virginia, US. He has worked with choral groups of all ages in public school, university, and church settings, and his compositions feature poetic texts, soaring melodies and stirring rhythms.

Various legends, registering differing degrees of reality and truth, inevitably surround such a famous and long-lived composition as Messiah by George Frideric Handel (1685-1759). It is known that he wrote most of the work in an astonishingly short three weeks time, beginning on August 22, 1741. Another legend attached to the work relates to his inspiration, which casts the frenzied composition as a sort of divine dictation. Handel is said to have emerged at some point (usually, it is noted, after finishing the “Hallelujah Chorus”) and proclaimed: “I did think I did see all Heaven before me, and the great God himself!” The first performance of Messiah took place in Dublin, on April 13, 1742. Handel gave the London premiere less than a year later at Covent Garden, and in the almost 300 years since then, Messiah has taken its rightful place as one of the most frequently performed and most beloved choral works of all time.

Richard Proulx (1937-2010) was an American composer, conductor, educator and music editor, and was one of the most well regarded composers of liturgical music in the twentieth century. He began his professional career at the Church of the Holy Childhood in St. Paul, MN, where he worked and directed for 15 years. Following his time in St. Paul, he directed and played for ten years at Saint Thomas Church in Seattle (1970-1980) before moving to the Cathedral of the Holy Name in Chicago where he played the organ and directed music for twenty years. Proulx was prolific, and wrote and arranged more than 300 works. His compositional abilities were broad, spanning the realms of instrumental, choral, and mixed ensemble works. Beyond his compositional pursuits, Proulx was an educator and clinician, teaching abroad in New Zealand, Australia, Canada, the Netherlands, Switzerland, and throughout the United States.

Francis Pott (1832-1909) was born in Southwark, Surrey, England. He studied at Brasenose College, Oxford, and was ordained Deacon in 1856 and Priest in 1857, then going on to serve a number of parishes. Pott wrote several original hymn texts, but is better known as a hymn translator – The Strife is O’er being one of his most popular and widely sung to this day.

George Ratcliffe Woodward (1848-1934) was an English Anglican priest who wrote mostly religious verse, both original and translated from ancient authors. The best known of these were written to fit traditional melodies, mainly from the Renaissance era. He sometimes harmonized these melodies himself, but usually left it to his frequent collaborator, composer Charles Wood. In 1894, he and Wood published Carols for Easter and Ascensiontide, which included the popular Easter carol This Joyful Eastertide, heard sung this morning by the Choir of King’s College, Cambridge.

Edmond Louis Budry (1854-1932) was a Swiss hymn writer, most famous for writing the lyrics to “Thine Be the Glory”, to music from Judas Maccabeus by George Frideric Handel. He studied theology in Lauzanne, Switzerland, and was a pastor for 42 years. Besides writing original hymn texts, he translated German, English, and Latin lyrics into French.

Richard Birch Hoyle (1875-1939) served as a Baptist minister in various churches in England for twenty-six years. Following that, he worked with the YMCA, and for some time edited their publication The Red Triangle. Hoyle translated about thirty French hymns into English – his most famous being “Thine Be the Glory.” He also translated hymns from twelve other languages, all of which he read fluently. In 1934 he went to the United States, where he taught at Western Theological Seminary in Philadelphia for two years. When he returned to England, he became the pastor at a Baptist church in Kingston-upon-Thames. 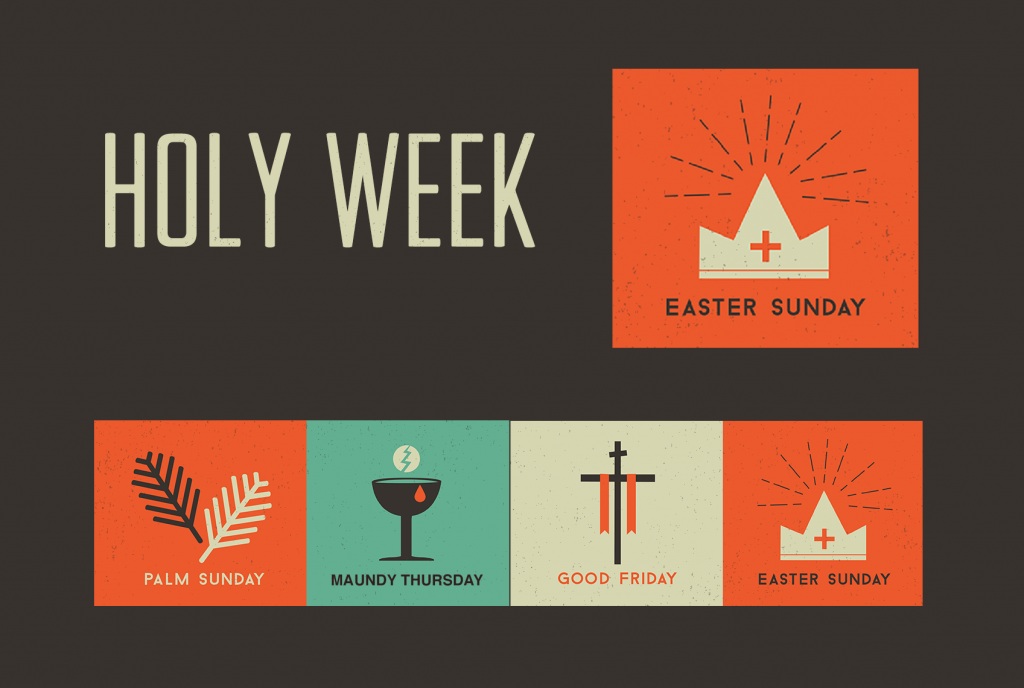