After its introduction to Europe in the 17th century, tea was tremendously popular in France. It first arrived in Paris in 1636 (22 years before it appeared in England) and quickly became popular among the aristocracy. Legend has it that in England, Afternoon Tea derives from Anna Maria Stanhope, the Duchess of Bedford (1783-1857), a lady in waiting of Queen Victoria, who in 1841 invited friends to join her for “tea and a walk in the fields.” Afternoon Tea filled the gap between lunch and a fashionably late dinner with a light serving of tea, sandwiches and cakes. This delightfully social and gourmand pastime sparked a trend that has continued to this day. It is called Afternoon Tea because it was usually held in the late afternoon. It is also called “Low Tea” because it was served in a sitting room where low tables were placed near sofas or chairs.

Afternoon Tea is usually a matter of personal taste and preference.
The overall goal is to enjoy yourself with friends.
But we thought it would be fun to share with you the background to Afternoon Tea.

Is High Tea a misnomer? What is Cream Tea, Afternoon Tea and Royal Tea?

‘Cream Tea‘ is tea served with scones, Devon or clotted cream, and preserves.

‘Afternoon Tea‘ is tea served with delicate sandwiches and a selection of cakes or sweets, originally served on a low table such as our modern day coffee table. Scones may be added to Afternoon Tea accompanied by Devon or clotted cream and preserves. Scones were not a common feature of early Afternoon Tea and were only introduced in the twentieth century.

‘High Tea‘ or ‘meat tea’ signifies an entirely different meal, comprised of a hearty evening meal, heavy with meats and breads, and historically taken by the lower classes, served at a high table such as the kitchen table rather than a low coffee table. (‘High’ implies table height, not class.) Please do not refer to your afternoon tea as a high tea. North Americans tend to misinterpret the term. The real meaning of high tea is a hearty, simple, sit-down meal that originated during the Industrial Revolution of the nineteenth century. High tea was the main meal of the day for workers who returned home very hungry after a long, hard day in the fields, shops, factories and mines, and for servants below stairs. More detail

What is the dress code for Afternoon Tea?

‘Smart or dress casual’ is the minimum dress code these days. But consider the following: It is the perfect excuse to get dressed up! A dress or skirt with pearls, gloves, hat or fascinator is a perfect way to turn it into a fun occasion for all! (Gloves would be removed when eating.) We don’t want to turn you away from this splendid time to sit and chat with friends, so if you don’t want to dress up, that’s fine too! 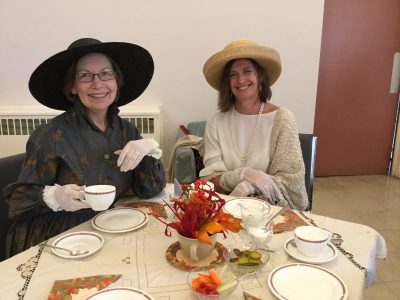 Why do we call our dish sets china?

The reason the West calls porcelain ‘china’ is because China was the country of origin for hard paste porcelain.

Is it acceptable to dunk biscuits into my tea?

There is not much to say on this matter, other than a very stern and finger wagging ‘No!’ When having Afternoon Tea with friends, we suggest you do not partake in this.

How do you pronounce scones?

Think: “How long ’til the scons are all gone? It makes me yawn.”

An integral part of an Afternoon Tea experience is the inclusion of freshly baked, warm scones with cream and preserves. This conundrum ‘cream first or jam first?’ along with the meaning of life and how long is a piece of string, is yet another of life’s on-going debates. Frankly, there are more pressing things in life such as ensuring the correct size of a tea napkin (12 inches square). Both the Cornish and Devonshire people lay claim to the invention of the Cream Tea, and each have a view on the order of the toppings. The Devon tradition is cream first with jam spread on top, whilst the Cornish tradition is to slather the jam on and top it off with clotted cream. Follow their lead if you are there. Otherwise, it remains a matter of preference.

MIF? Should I put milk in first, or tea in the cup first?

The question of the order in which you add milk to tea or tea to milk is quite possibly the most hotly debated of all the tea-related enigmas. Britain’s etiquette consultant, William Hanson, offers the definitive answer:
Tea in first. Always. There used to be aspersions cast as to a person’s heritage if they put milk in first.

Originally all tea cups in Europe were made from soft paste porcelain. The milk was added first to temper the cups from cracking with the hot water. Once hard paste porcelain was used in Europe after 1710, it was no longer necessary to temper the cups. The lower classes may have continued to use less expensive, cracked or chipped cups, necessitating care. This was not the case with the upper class. Therefore the order of adding milk “gives an impression of your upbringing!” Furthermore, it is said that you are unable to judge the strength of the tea by its colour if you put the milk in first.

There are many ways in which you can tailor a cup of tea to your own personal tastes, whether that be the addition of lemon, sugar or milk – The choice is yours!

Lemon is served in thin slices that you float in your tea cup. Traditionally, the lemon slice would also contain a clove in the center of the lemon slice. The floating lemon slice enhances the flavour of the tea. Do not squeeze. Do not put the lemon slice in your saucer. Lemon is agreeable with most black teas. Lovers of fragrant Earl Grey and smoky Lapsang Souchong, however, say they are best enjoyed unadulterated. Never add lemon with milk since the lemon’s citric acid will cause the proteins in the milk to curdle. If you plan to have sugar and lemon in your tea, add the sugar first, otherwise the citric acid of the lemon prevents it from dissolving.

Sugar cubes are preferable, not only for the ritual of using elegant sugar tongs, but for their neatness. No one wants to deal with spilled sugar granules. Allow the cube(s) to rest briefly (to dissolve) and then stir gently and noiselessly.

How should I stir the tea?

Prevent saucer spills by filling the teacup only three-quarters full.

Absolutely not. The common misconception is that outstretching one’s little finger aids the balance of the cup when taking a sip of tea; this is almost certainly not the case and is not only pointless but slightly silly. Originally, all porcelain teacups were made in China, starting around 620 A.D. These small cups had no handles. In order for one not to spill the hot liquid onto oneself, the proper way to hold the vessel was to place one’s thumb at the six o’clock position and one’s index and middle fingers at the twelve o’clock position, while gently raising one’s pinkie up for balance. However, in 1710 the Meissen Porcelain Company, introduced the handle to the teacup.

Here’s the proper way to hold the tea cup handle:

How should I eat my scones?

Never use a knife to cut your scone in half. Break the scone apart with your fingers. Do not, I repeat do not, sandwich the two halves back together to eat it.

The top layer of the cake stand at afternoon tea will be for the cakes; although for the Victorians, it housed little enclosed muffin warmers – hence the large arch in some tiered cake stands.

There are no set rules as to what is on offer here – nonetheless, they should be dainty and the sandwiches capable of being eaten in a few mouthfuls with the fingers; and the sweets with a small fork.

Cupcakes are never part of a proper afternoon tea.

Tea sandwiches must have their crusts cut off, and are presented either in the shape of triangles, rectangles or – as the royal household prefers – in small squares. They are finger sandwiches and are eaten with the hands, not cutlery.

The napkin is picked up and unfolded on the lap, not above the table level. A large dinner napkin is folded in half with the fold facing the body, while a small napkin may be opened completely. If you need to leave the table temporarily, place your napkin on your chair, not on the table. Do not place a used napkin back on the table before the meal is over. The wait staff may refold the napkin and place it on the table to the left side of your plate or on the arm of your chair. Return the napkin to your lap when seated. At the end of the tea, the napkin is not refolded but picked up by the center and placed loosely to the left of the plate.

How do I brew a perfect pot of tea?

Put hot water in your tea pot in advance to warm it up while you wait for the water to boil.

Start with cold water for your tea. Fresh cold water contains more oxygen than hot tap water or water previously boiled and is vital in capturing the flavour of tea.

Bring it to a boil.

Be careful not to over-boil the water: the longer water boils, the less oxygen it contains. Furthermore, do not allow boiled water to cool before infusion; otherwise, the water goes flat and cannot draw full flavour from the leaves. Do not boil the water and the tea leaves together because tannin is insoluble in water, and when water is boiled with tea leaves, the tannic acid increases and makes the brew taste bitter.

As soon as the water boils, quickly empty the teapot of the warming water.

Put the tea bag or loose tea in the teapot.

Then immediately add the boiling water. This action causes the tea to open up for full infusion and promotes tea with optimum flavour and aroma.

Cover with a tea cosy to keep the tea hot while it steeps.

A general guideline is to steep for 3 minutes. Remove the tea bag if you are using tea bags. Tea is steeped by the clock, and not by the colour, according to the type of tea leaves you use.

Just before serving, stir the tea. This will distribute the essential oils evenly, balance the strength, and enhance the flavour and aroma of tea. If you are using loose tea, allow the tea leaves to settle before serving and use a tea strainer when pouring the tea into the tea cup.

The true definition of class is to be considerate and treat all others with dignity.
Afternoon tea was created to foster friendship so don’t get caught up in silly rules!
May your afternoons be filled with enjoyment, good tea and good friends.
.
sources:
William Hanson
Etiquette Scholar
Afternoon Tea Co
What’s cooking